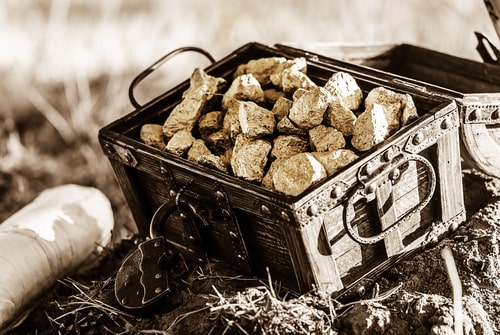 (Kitco News) - A mysterious gold hunt in the backwoods of Pennsylvania for lost Civil War bullion earlier in the year has taken a strange turn, with some treasure hunters accusing the Federal Bureau of Investigation of hiding what was believed to have been found.

“After my years of experience here using equipment, there was something here, something here of value, some kind of precious metal. And whatever it is, it's gone now. And that's what I want to get to the bottom of, is what was in that hole,” one of the owners of the Finders Keepers treasure-hunting group Kem Parada told AP.

In the latest twist, the group filed a Freedom of Information Act request for documents from the FBI and the Justice Department ordered the FBI to do a more thorough review. But, it could still take months before anything is resolved.

The request for documents came following March reports that dozens of federal agents and members of the Finders Keepers group were trekking through the forest near Dents Run, located about 135 miles northeast of Pittsburgh, Pennsylvania, looking for gold thought to be lost 155 years ago.

The owners of the Finders Keepers group, Dennis and Kem Parada, were confident back in March that they found the long-lost gold, adding that they were warned by government agents to keep quiet.

“We believe that we found the gold at the Dents Run site and that the state is doing everything that they can to stop us from telling our story,” Parada said in a written statement in March. “We found a bullet shell, knifes, animal traps, zinc mason jar lid, tin cans, bones (human or animal), whiskey bottle, camp fire pit, and a lot more that the state now has and won’t return. They say that they don’t have the time or the money to go treasure hunting but if we can show them the gold then they will look into it.”

Following court-sanctioned excavations that lasted two days, the FBI reportedly led treasure hunters to the site of an empty pit, with no signs of previously detected gold nearby.

“They walk us in, and they make us look like dummies. Like we messed up,” said Dennis Parada. “We were embarrassed.”

This was Parada’s first comments since the story first broke in March.

The confusion of why no gold was discovered despite metal detectors reportedly detecting gold led to speculation and a lot of confusion around the FBI’s narrative.

The Finders Keepers group is now questioning whether the FBI is revealing everything about the excavations that took place.

The treasure hunters said they were first told they could watch the excavations, but were then confined to their vehicles by the FBI.

The FBI team said it wrapped up the first day of excavations in the afternoon, but other witness statements noted loud noises coming from the site well into next day’s early morning hours.

On the second day of excavations, Paradas were once again confined to their cars and then led to an empty hole.

“You can only dig the gold up once, and that's a historical moment. And here we were robbed of all that,” said Parada. “I don't understand why they played that game on us.”

According to local lore, a shipment of 26 or 52 gold bars (depending on who is telling the story), weighing more than 739 troy ounces each went missing in the state just before the Battle of Gettysburg.

The stories go, the bullion was traveling from West Virginia on its way to the U.S. Mint in Philadelphia. The shipment, which could be worth up to $50 million based on today’s prices, was supposed to be used to pay Union soldiers.

While the treasure hunting group believes that there was gold hidden in the woods, many local historians have said that it is unlikely the stories and legends of lost gold are true.