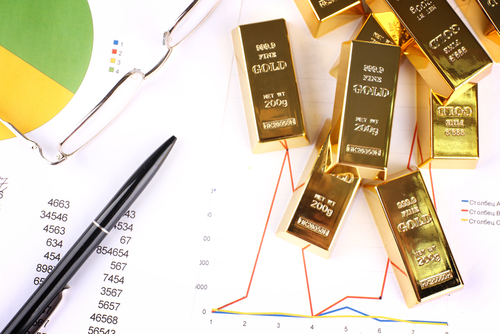 (Kitco News) - Gold is going up from here, according to one strategist. It might not be in a straight line, but brighter days are ahead for the yellow metal, with the worst behind it.

“Gold will benefit going into the end of the year as well as beyond,” RBC Capital Markets commodity strategist Christopher Louney told Kitco News on Thursday. “There’s plenty of room for gold to run, but it doesn’t mean it is going to be a straight shot higher. On average, there’s potential for upside in prices.”

Louney said the gold will average $1,266 an ounce in the final quarter of this year, which means the yellow metal has at least another $40 climb to make just to reach that average. December Comex gold futures last traded at $1,223.90, down 0.38%.

The strategist’s comments came after gold prices climbed more than $29 on the day and reported their biggest daily gains in two years, largely driven by a significant correction in the equity markets on Wednesday and Thursday.

“The rally fits with a long-held view that the market is under-appreciating risks — a new normal/higher tolerance for uncertainty. But I think with the sell-off in equity markets we 've definitely seen some reset in risk appetite in gold in the short-term,” Louney said.

Gold’s jump higher is absolutely justified, he noted, while adding that the sustainability of the move will depend on how the dollar, equities and rates trade from here.

“A lot of what we are looking at for gold prices going into not only the end of this year but into 2019, is how the equity markets play out, how the U.S. dollar performs versus other major currencies, and how risk appetite is either changed or at least re-priced in the context of gold,” Louney stated.

Another essential element working in gold’s favor is the resurgence of safe-haven interest, especially when it comes to gold.

“As people are thinking about their portfolios to year-end, that’s when market participants will take a look at gold. Prospects for 2019 are also positive,” Louney said. “Key factors are people making allocations into gold. We are looking for repricing of that risk appetite.”

The Federal Reserve shouldn’t be much of an obstacle to gold prices unless some major shift occurs, as continued rate hikes have already been priced in by the markets well into next year, added Louney.

Going into 2019, RBC is not a bear, with Louney stating that the risk is skewed to the upside for gold.