(Kitco News) - It's only a matter of time before investors come back to the mining sector, but they need to see viable business and growth potential, according to Sean Boyd, CEO of Agnico Eagle (NYSE: AEM, TSX: AEM).

It's with that focus that Agnico Eagle prepares to launch its two new mines in Nunavut, Canada's eastern Arctic. The company's Meliadine property just outside of Rankin Inlet is expected to start production in the second quarter of 2019 and its Amaruq property near Baker Lake is scheduled to begin in the third quarter.

In an exclusive interview during a tour of Meliadine property, Boyd said that his company's latest investment in Nunavut could be just the start in what he sees as a jurisdiction with unlimited potential.

"Nunavut is a big part of Agnico's Future," said Boyd. "We think this is the start of a multi-decade opportunity. From a project perspective, Meliadine is our largest single construction effort in the company's 60-year history. But more importantly, it allows us to continue to grow our output."

Boyd added that the Amaruq and Meliadine will help the company generate new cash flows, which in turn will allow the company to continue to grow on a sustainable basis.

Not only is Meliadine expected to add 400,000 ounces of gold to Agnico's production pipeline when it is fully operational, but Boyd said that it is a testament to what a company can accomplish in a challenging environment. Everything that was needed to build the mine had to be brought in by a barge between June and October. Boyd described the mine construction as an incredible feat of management and engineering.

"With Meladine, we have created a template that we can use and build on for what we expect will be other projects in Nunavut," he said. "We see this as a core asset to what is an emerging platform for us in Nunavut."

Looking at the potential in Canada's northeastern territory, Boyd said that the area represents a source of untapped potential and Agnico now has the tool and experience to operate in what can be a challenging location.

"We see tremendous mineral potential in Nunavut," he said. "In Nunavut, we have a solid partnership in the people, who see the importance of developing their natural resources." 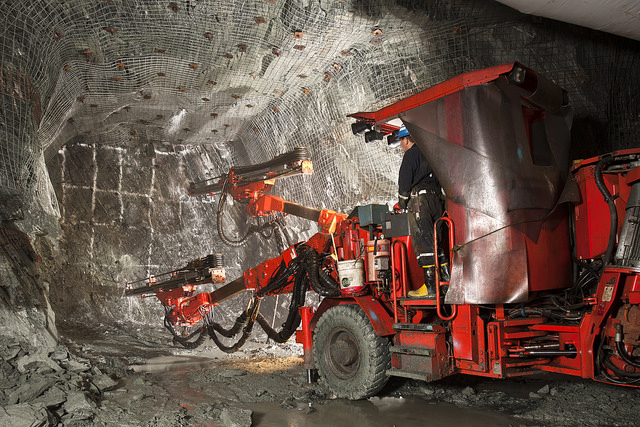 Adding to what Boyd sees as his company's success, he said that it is vital to treat gold mining like any other type of business with a focus on growth and cash flow. He said that once the price of gold picks up, investors will come back to the mining sector.

"We need to be patient, be steady and continue to invest in future growth. We see the potential in our investment over the long term," he said. "At the end of the day we think we have a good strong business, it just happens to be a gold company."

While the company continues to expand its presence in Nunavut, Boyd said ultimately, the market needs to see higher gold prices to attract long-term investors.

"At $1,200 the industry can't sustain itself long-term. We think higher gold prices will come," he said. "You also need companies that have a track record of generating value through the cycles. We have been fortunate to be able to invest through the cycles and continue to grow."

The gold market is starting to see renewed interest after the yellow metal saw its best day in two years last week, rallying nearly $30 to hit a nine-week high. The precious metal has been able to hold on to most of last week's gains. December gold futures last traded at $1,232 an ounce, up 0.82% on the day.