Are Gold Bears Feeling The Squeeze Yet?

(Kitco News) - Sentiment appears to be shifting in the gold market and analysts are dismissing a new record in speculative bearish positioning shown in the latest data from the Commodity Futures Trading Commission (CFTC).

The CFTC's disaggregated Commitments of Traders report (COT), for the week ending Oct. 9, showed money managers dropped their speculative gross long positions in Comex gold futures by 18,453 contracts to 82,218. At the same time, short bets rose by 11,398 contracts to 191,672. Gold’s net-short positioning currently stands at 109,454 contracts, a more than 37% increase from the previous week. 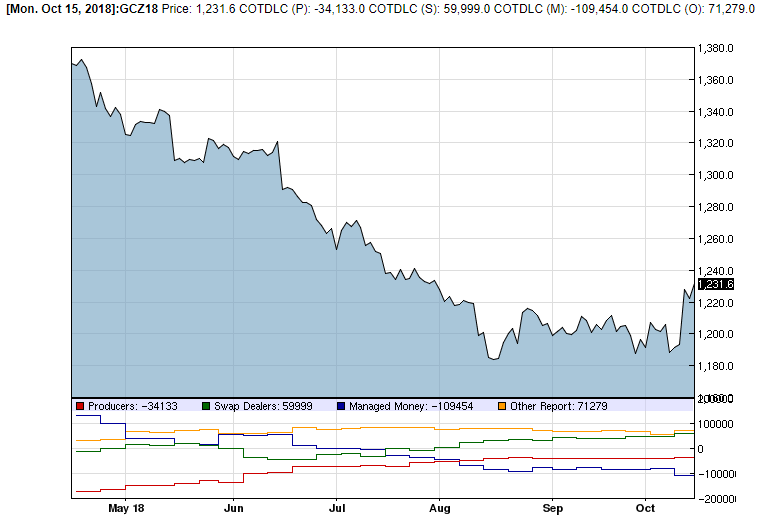 Along with shorts hitting a new record high, the increase in positioning was the biggest percentage change since mid-July. However, many analysts are throwing the latest report in the trash bin as the gold market saw a significant shift two days after the end of the survey period.

Traders and investors will have to wait until Friday for the release of the next COT report, which will cover gold’s 2% rally last week.

Fred Hickey, editor and creator of the High-Tech Strategist newsletter, described the market action as bearish speculators heading in a “buzzsaw.”

“[The] COT will look different next week, but likely still extremely favorable,” he said in a twitter comment. “The record shorts (highly levered derivatives) against gold are toast, just as they were in late-2000. Expect more short-covering spikes.”


Ole Hansen, head of commodity strategy at Saxo Bank, said that the new bearish positioning could explain the nearly $30 rally in gold as some short traders were quick to get out after being caught on the wrong side.

He added that while bears are feeling some pressure, he suspects that it will take gold prices to push above $1,240 an ounce to trigger another round of significant short covering. However, he added that with speculative positioning at record levels, there is the potential to see gold $50 to $75 higher by the end of the year.

Analysts at Commerzbank also see potential for higher prices in the near term. “There was certainly potential for short covering given that speculative financial investors had expanded their net short positions significantly again to a record high of nearly 110,000 contracts in the last CFTC reporting week,” the analysts said in a report Monday.

Analysts are also optimistic that the silver market will see better days as prices rose in lockstep with gold last week after a significant liquidation in bullish positioning recorded in the latest COT data.

The disaggregated report showed money-managed speculative gross long positions in Comex silver futures fell by 5,087 contracts to 45,587. At the same time, short positions rose by 107 contracts to 86,851. Silver’s net-short positioning increased to 41,264 contracts, an increase of 14% from the previous week.

Silver prices were relatively stable through the survey period, only to rise nearly 2% two days later.