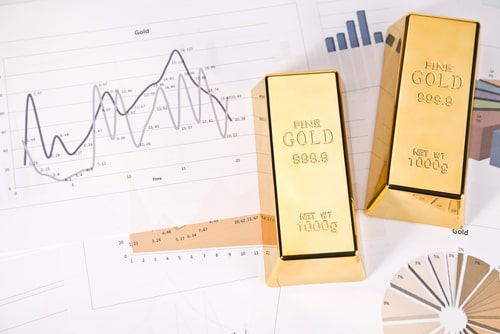 (Kitco News) - Gold prices could easily post more gains due to record short positioning in the precious metal, with prices potentially rallying to near the $1,280-an-ounce, provided that the U.S. equity space continues to see some weakness, said TD Securities.

“Considering that gold is sitting very near a key resistance point ($1,228/oz, 100dma) and that there is record short exposure, it would not be surprising to see a breakout toward the 200dma near $1,277 should U.S. equities show additional weakness,” said TD Securities head of commodity strategy Bart Melek.

“Speculation that the sharp U.S. equities correction may limit the Fed's resolve to follow a restrictive path and capital inflows gave a big boost to gold. The resulting weaker USD and materially lower U.S. 10-year yields should see interest in building length and boost prices,” Melek wrote. “In the absence of a sharp equity decline and the resetting of rate expectations, gold prices will likely gravitate modestly lower for the time being.”

Gold prices have started the week with gains following a long-awaited rally last week when the metal gained more than $29 in just one day. December Comex gold was last trading at $1,234.20, up 0.32% on the day.

“With 10-year Treasury yields dropping materially from their high of nearly 3.26% and the yield curve flattening, the reduced opportunity and carry costs was likely a key catalyst for the move higher to the $1,220s and to as high as $1,230s on Monday,” he said.

Another element working in favor of gold this week is geopolitics, especially the rift between the U.S. and Saudi Arabia regarding a missing journalist who many think was killed by the Saudi Kingdom.

“The U.S. Secretary of State is in Saudi Arabia talking to the king. President Trump over the weekend said there would be ‘severe punishment’ of the Saudi Kingdom if it was determined it killed the journalist. Some reports are now saying a Saudi may admit to killing the journalist,” said Kitco senior technical analyst Jim Wyckoff.

This week, markets are also shifting attention to the release of the FOMC September meeting minutes, scheduled for Wednesday.

“After mixed signals on meeting day, the minutes will give further insight into what the Fed is thinking, potentially impacting interest rates which have been on a rampage of late,” strategists at TD Securities said.