Expect Higher Gold Prices For The Rest Of The Year - Analyst 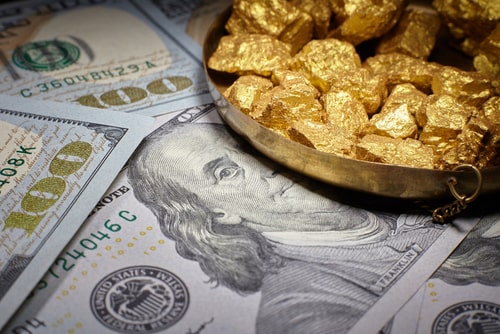 (Kitco News) - A trifecta of factors will keep gold prices higher for the rest of the year, according to one gold bull.

“Last week, the macro backdrop produced an ideal cocktail for gold spot prices. The dollar was down, U.S. real rates were down, and U.S. equities were down. This ‘sweet’ triptych elicited a strong increase in monetary demand for gold, evident in positive ETF investor flows,” Metal Bulletin precious metals analyst Boris Mikanikrezai wrote in a Seeking Alpha post earlier this week.

More good news for gold is that Mikanikrezai sees all three triggers — U.S. dollar, U.S. real rates, and U.S. equities — declining in the near term, creating a healthy positive environment for the yellow metal.

“U.S. equities could witness more downside as overhyped expectations of earnings are being corrected. In turn, the market would expect the Fed to adopt a less hawkish stance as a result of a “natural” tightening of domestic financial conditions (through a de-rating across risk assets), and ergo, the dollar and US real rates would push lower,” he said.

Gold prices hit a 10-week high earlier this week, following last week’s rally that saw gains of more than $29 in one day, its best day since 2016.

By Thursday, gold managed to maintain most of its gains, with the December Comex gold futures last trading at $1,229.30, up 0.15% on the day.

Another part of the equation is the extremely bearish position in gold, Mikanikrezai pointed out.

“Although the net spec length (-119 tonnes) is currently above its historical low of -275 tonnes (established in November 97), the current speculative positioning in Comex gold is still viewed as extremely bearish,” he said.

This kind of bearish extreme is vulnerable to “an aggressive normalization,” which will be positive for gold prices, the analyst warned.

“The speculative normalization in Comex gold is likely to produce a marked rally spot gold prices, which in turn will push the value of BAR noticeably higher,” he said.