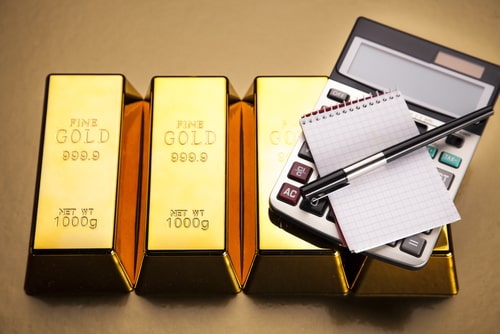 (Kitco News) - Large speculators cut their net-bearish positioning by more than half during the most recent reporting week for data compiled by the Commodity Futures Trading Commission.

BMO Capital Markets said gold prices rallied on geopolitical tensions and a softer U.S. dollar. Still, analysts said, the net-short position remains large by historical standards, although some cite this as a sign of potential for more short covering to come.

The commission issues two reports each Friday -- a so-called “legacy” report and a “disaggregated” report, which was started in 2009 and meant to offer more detail.

The disaggregated report showed that money managers stood net short by 49,382 contracts for the week ending Oct. 16, down from 109,454 the prior week. The bulk of the change was traders buying in order to exit from bearish bets, as the number of total shorts fell by 46,957. There was also some fresh buying, as reflected by a 13,115 increase in gross longs.

“As we had expected, there was massive short covering in gold in the week to 16 October,” said analysts with Commerzbank, adding that speculative financial investors played a big role in the surge in gold prices during this time period.

“That said, given the extent of the position squaring, we would have expected the gold price to rise even more sharply,” Commerzbank continued. “However, we envisage further upside potential for the gold price from this side given that net-short positions are still considerable.”

In the case of silver futures, money managers’ collective net-short position fell to 33,399 lots from 41,264 the week before. The number of total shorts declined by 7,660, while gross longs increased by 205 lots.

“Silver likewise saw short covering in the latest CFTC reporting week, albeit on a much smaller scale than gold,” Commerzbank said. “Accordingly, silver has risen less steeply than gold, causing the gold/silver ratio to climb to nearly 84.”

'Both gold and silver are now oversold': Commerzbank