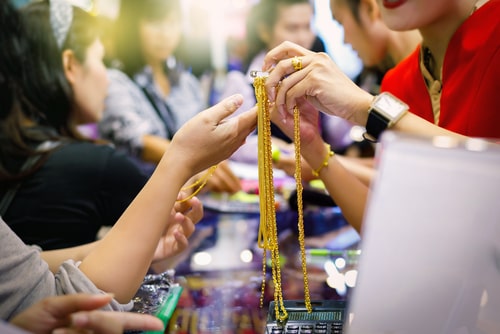 Total global gold demand was 964.3 tonnes in Q3, just 6.2 tonnes higher on an annual basis, the WGC said on Thursday.

The Council pointed out that a turnaround in global gold demand was restrained by massive outflows from gold-backed ETFs, totaling 103.2 tonnes.

The North American market led the drop in ETFs, accounting for 73% of the outflows, with investors paying more attention to rising equities and optimistic economic growth, the report said.

“Global gold-backed ETFs saw the first quarterly outflows since Q4 2016. This is largely because of the positive macroeconomic backdrop in the U.S. Equity markets performed well, with the S&P 500, Dow Jones and Nasdaq all hitting record highs in Q3. The economy is motoring, inflation is edging up and the Federal Reserve is expected to continue tightening monetary conditions,” the WGC said.

In complete contrast to ETF outflows was physical demand, with investors across the globe stocking up on gold while prices remained low, the WGC reported. 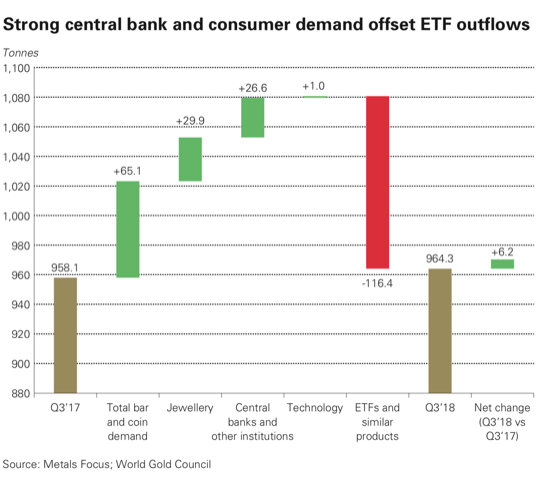 Bar and coin demand surged 28% on an annual basis, rising to 298.1 tonnes in Q3, with growth reported in all markets.

Jewelry demand was also up 6% in Q3, totaling 535.7 tonnes, according to the WGC, with India and China seeing solid increases based on lower jewelry prices. 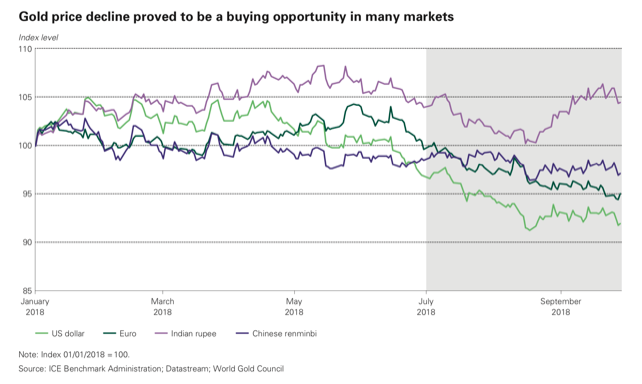 On top of that, central-bank buying was a major element supporting global gold demand in Q3, with Russia, Turkey and Kazakhstan leading the buying spree.

New players during this past quarter included the Reserve Bank of India, the National Bank of Poland, and the Hungarian National Bank. 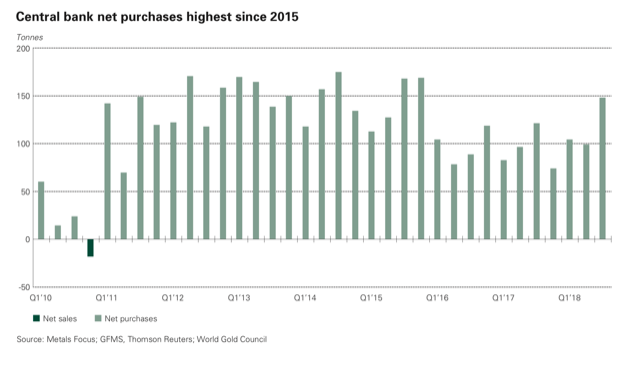 The need for gold on the technology front was up as well, rising 1% on an annual basis in the third quarter, driven by printed circuit board (PCB) sector.

“This uptick was again driven by strong electronics demand, particularly in the PCB and memory sectors, offsetting a surprising decline in wireless demand,” the report explained.

Gold’s supply, on the other hand, was slightly lower in the third quarter as year-on-year mine production growth was offset by elevated de-hedging and lower recycling, the WGC added.

Mine production is expected to continue on its upward trajectory amid renewed optimism in the sector.

“A combination of growth from key producing countries – such as Russia and Canada – as well as the improving production pipeline, will be supportive of further growth in 2018,” the WGC said.