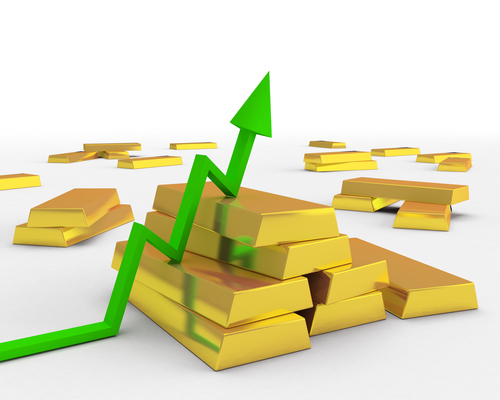 (Kitco News) - Gold is due for a comeback even if the global equities space rallies following a recent correction, according to Wells Fargo, which projects to see the precious metal rise another 7% from current levels.

“We suspect that gold could very well continue to rally as we exit 2018 and enter 2019, even if stocks do too. Our rolling 12-month gold target is $1,300—roughly 7% higher than today’s prices,” Wells Fargo head of Real Asset Strategy John LaForge said in a report published on Monday.

In October, gold saw a 2% price boost from a correction in global equities, as the safe-haven investment offered traders a good place to “hide” while the stock market posted losses, LaForge noted.

“Stocks had a volatile and tough October—with several equity indices stumbling into the official -10%, correction territory,” he stated. "Gold's physical properties (does not lose its shine, and is impervious to air and water) allows it to literally survive time.”

Gold’s move up does not have to be a temporary one either, the strategist wrote. “From here, history suggests that gold prices do not necessarily have to sink. In fact, they could move higher, even if most stock markets are done correcting,” LaForge said.

An important October trend to keep an eye on going forward is gold rising alongside a rallying U.S. dollar, the report pointed out. “Gold’s 2% gain is even more impressive when we consider that the U.S. dollar also rose by 2% last month,” the strategist explained.

The high for gold prices next year could be around the $1,350 an ounce level, Wells Fargo specified.

“Gold's relative value looks appealing too, as it is cheap vs. both stocks and bonds,” LaForge noted.

Where are the stops? Friday, May 14, gold and silver