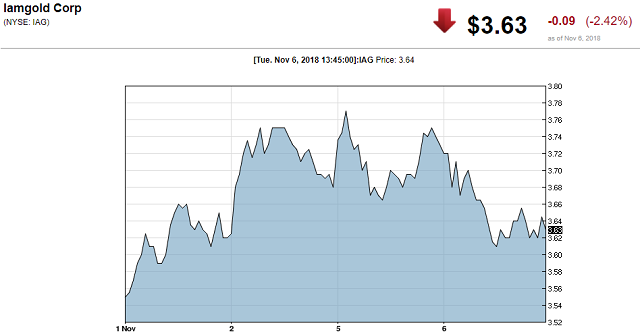 (Kitco News) - Iamgold Corp. (TSX: IMG; NYSE: IAG) late Tuesday reported a loss for the third quarter as revenues came in lower than in the same period a year ago, with both production and gold prices weaker but costs higher.

Revenues of $244.8 million were a year-on-year decline of $24 million. Gold production fell by 9,000 ounces to 208,000, with lower head grades reported at the Rosebel and Westwood mines, along with joint ventures.  Meanwhile, the average realized price of gold fell to $1,207 from $1,284 in the same quarter a year ago.

All-in sustaining costs rose by $117 to $1,086 an ounce. The company said it had higher depreciation expenses, plus operating costs rose due to factors such as increased maintenance and contractor costs resulting from higher mine production at Essakane, increased preventative maintenance at Rosebel, lump-sum payments at Rosebel and Westwood as a result of a new labor agreement, and higher energy costs.

“As anticipated, the third quarter was weaker than the first half of the year with the gold margin under pressure and production at Rosebel on the lighter side,” said Steve Letwin, president and chief executive officer.

He was upbeat about the company’s project pipeline, however, including the 51% increase in reserves at Saramacca, which the company announced in late September.

Iamgold said it is advanced discussions with lenders to increase the existing credit facility from $250 million to $500 million to “provide additional financial flexibility as it executes its growth strategy.” Officials said the facility is expected to close before year-end.