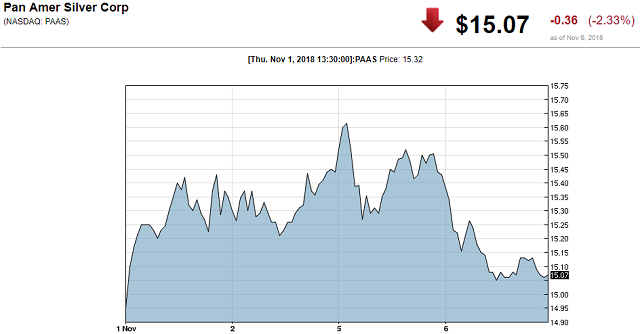 The adjusted loss was listed at $4.7 million, or 3 cents per share, impacted by approximately $23.4 million in negative NRV inventory adjustments, Pan American said. In the same quarter a year ago, the company posted a net profit of $23.3 million, or 15 cents.

"The depressed metal prices had a significant impact on both settlement adjustments on concentrate shipments and NRV inventory adjustments, which together reduced earnings in the quarter by approximately $33.2 million," said Michael Steinmann, president and chief executive officer.

However, while production was up for all but copper, prices for all five metals declined from a year ago. The average realized silver price eased to $14.88 an ounce from $16.68, and the average gold price fell to $1,212 from $1,277.

Still, Steinmann said the company increased its cash and short-term investments to $252.7 million despite the lowest metals prices of the year.

Pan American’s board of directors approved a cash dividend of $0.035 per common share, same as after the second quarter, payable around Nov. 30 to shareholders of record as of the close on Nov. 19.