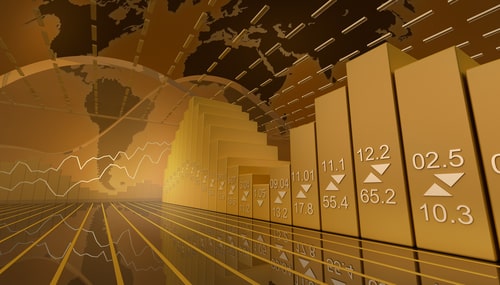 (Kitco News) - With the U.S. midterm election and the latest Federal Reserve decision out of the way, gold analysts are now switching focus to the U.S. dollar and global macro data releases— the two biggest triggers that could impact gold in the short-term, according to TD Securities.

The yellow metal began to drop following last week’s decision by the Fed to remain on its hiking path while looking past the recent sell-off in equities, said strategists at TD Securities.

“Perceptions that the Fed is committed to taking rates into restrictive territory, an increasingly firm USD, along with CNY weakness amid Chinese growth worries drove gold and silver sharply lower— prices to stay near the lower bound until a macro catalyst materializes,” the bank’s head of commodity strategy Bart Melek wrote in a note on Monday.

Another element adding to gold’s most recent downward move is the concerns surrounding the health of the global economy, which is also impacting oil and base metals.

“Oil’s sharp and prolonged decline served as a warning to markets that the global economy may be weakening faster than expected, which has likely prompted capital to flee the entire commodity complex,” Melek said. “The safe-have USD buying, weak CNY and rising yields also played a starring role in convincing traders to lighten positions in commodities broadly.”

From here on out, investors should pay closer attention to global macro data and how any new economic activity figures impact the U.S. dollar and gold, the TD strategist said.

“There is plenty of economic data across the globe to pique the interest of investors this week. In the U.S., the latest inflation, retail sales and manufacturing data will be the key points, while in Europe the GDP, employment, CPI, industrial production and auto sales data are all on the calendar. Furthermore, industrial production, retail sales, along with financing and fixed asset data will be released in China as well,” Melek wrote.