Bitcoin Investors In For More Pain As Prices Hit 13-Month Low Below $6,000 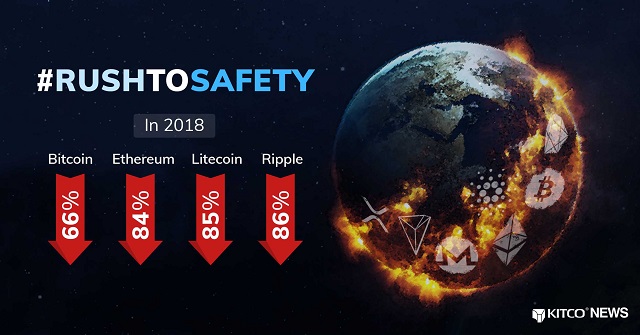 (Kitco News) - The digital currency market is attracting new attention of the wrong kind as market analysts warn that they see further declines in the near-term as the new downtrend picks up momentum.

Bitcoin, the leader in the cryptocurrency sector, has fallen further below the $6,000 level as it trades near its lowest level in 13 months. According to Kitco.com aggregated charts, bitcoin last traded at 5664.80 per token, down 4.35% on the day. The drop comes after Wednesday’s sharp 9% drop.

Bitcoin is down 66% since the start of the year, but is still the best performer in the sector. Looking at other digital currencies year to date: ethereum is down 84% litecoin is down 85% and ripple is down 86%.

“More downside is likely in the near term,” he said. “The crypto sector is in serious trouble and the crypto bulls need to step up and stop the bleeding to avoid a major train-wreck in the sector.”

Mike McGlone, senior commodity strategist at Bloomberg Intelligence said that the latest selloff was sparked by a hard fork in Bitcoin Cash, creating another cryptocurrency under the bitcoin banner.

According to reports, the fork will see bitcoin cash split into “Bitcoin ABC” or core Bitcoin Cash and “Bitcoin SV” or “Satoshi's Vision.” Bitcoin Cash itself was a hard fork, created in August 2017 from Bitcoin Classic.

“Most supply, demand and market-price indicators remain negative for what remain highly speculative cryptographic assets. The ‘hard fork,’ Bitcoin Cash, represents the unlimited-supply overhang to prices,” he said. “If recent history is a guide, Bitcoin is at a high risk of further price weakness.”

In the long-term, McGlone said that he could see bitcoin falling as low as $1,450 before this selloff is over, which also represents a parity value he sees for gold.

Charles Hayter, CEO and co-founder of CryptoCompare, a U.K.-based market leading cryptocurrency market data provider, said that he expects the crypto sector to remain volatile as the marketplace continues to evolve; however, he added that investors still need to look at the long-term value of the technology.

“Cryptocurrencies are here to stay,” he said. “As the market matures we will start to see less price volatility. We are already seeing that some of that as the bitcoin prices fall less and less in these corrections.”

Hayter added that the market is also starting to evolve as the sector continues to build a bridge into mainstream financial markets. He added that the sector is making the transfer of value between people quicker and more efficient.