Emirate Palace Splashes Out $130K A Year On Its Gold Ceiling 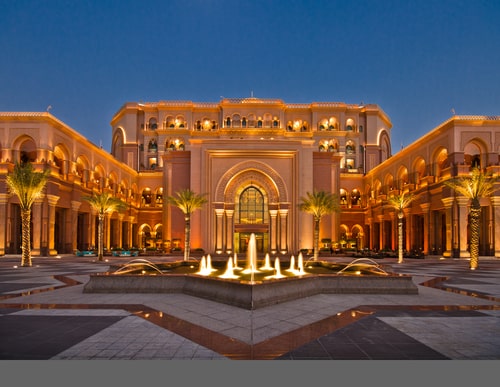 The reason for such a high annual price tag is the fact that the gold and silver leaves last only four to five years and need to be completely replaced, CNN Travel reported quoting Manoj Kuriakose, an engineer in charge of taking care of the gold ceiling.

The stunning display needs about 50 gold leaves per ten square feet, which comes out to around $100.

Craftsmen are able to replace about 64 square feet of gold per day, which works out to about $130,000 per year, Kuriakose said.

The thin sheets of gold come from Italy. They are then rolled, pressed and then forged into even thinner leaves.

The process of applying the leaves is a very delicate one, Kuriakose added, noting that it requires a lot of attention and patience.

“We fix the leaves one by one. It is very fragile, and you have to be very careful,” he said. “It is very thin, it can break. When you pick it up, if you're not taking it carefully, and even your finger has the slightest movement, it can break.”

A special glue is used to make the gold leaves stick. But, prior to the application, the ceiling is first colored with a warm red paint. After the gold is applied, craftsmen put an additional protective layer of coating on top of the leaves.

Aside from the gold ceiling, the $3-billion hotel also boasts of 1,000 Swarovski chandeliers on its property, which stretches over half a mile from east to west.

Did you know that Emirates Palace Hotel of #AbuDhabi needed a budget of 3 USD billions to be completed?!
Explore Emirates Palace tour https://t.co/qXbAd6UaIU and find out a list of 23 places to go in Abu Dhabi https://t.co/Ly20wAFV5F
#Travel #InAbuDhabi #VisitAbuDhabi #Weekend pic.twitter.com/q6XrD9jGH1