(Kitco News) - Goldman Sachs looks for gold to rise as investors seek the metal for portfolio diversification, particularly if growth in the U.S. economy begins to slow. 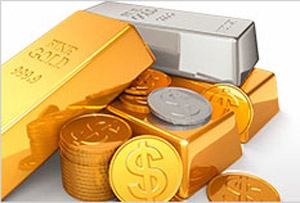 Also in a report, published Monday, analysts said they look for palladium to keep outperforming sister metal platinum until the auto industry begins to substituting more platinum for palladium in catalytic converters. Overall, Goldman analysts described themselves as upbeat on commodities in general.

The investment bank favored a long, or bullish, trade in gold.

“We see diversification value in adding gold to portfolios,” Goldman said. “If U.S. growth slows down next year, as expected, gold would benefit from higher demand for defensive assets. At this stage of the business cycle, gold may be particularly appealing as a portfolio diversifier given that long-term bonds, traditional safe-haven assets, may be hurt if U.S. inflation surprises to the upside.”

The gold market also remains underpinned by central-bank demand for the metal, said Goldman. Analysts point out that some central banks have bought gold for the first time since 2012.

Furthermore, speculative positioning is already pessimistic, with Goldman doubting bearish positioning can continue to grow, calling for a rebound as the strong trend in the U.S. dollar begins to fade.

“Finally, the market has already priced in 10 out of the 12 [Federal Reserve] rate hikes that we expect,” Goldman said.

Meanwhile, the investment bank said it favors being long in palladium versus platinum. Palladium has been in a supply deficit since the end of the Russian stockpile sales in 2012-13, while platinum is in a market surplus due to falling share of platinum-intensive diesel cars that use the metal, plus weaker jewelry demand in China.

“These diverging market balances meant that implied private inventories of palladium fell substantially while platinum’s increased, which in its turn drove outperformance of palladium relative to platinum,” Goldman said. “In our view, for this dynamic to reverse, we need to see evidence of substantial substitution of palladium for platinum in auto catalytic converters. We think that in the short run this is unlikely to happen as palladium performs better under new extreme conditions emission tests and it will take several years to develop, test and adopt a more platinum heavy catalyst.”

Looking at commodities as a whole, Goldman said it remains “overweight” and looks for S&P GSCI total returns of 17% in 2019.

“Given the size of dislocations in commodity pricing relative to fundamentals with oil now having joined metals in pricing below-cost support, we believe commodities offer an extremely attractive entry point for longs in oil, gold and base [metals],” Goldman said.

An upcoming meeting of Group of 20 nations could be a catalyst for a rebound in commodities, particularly if there is an improvement in U.S.-China relations and should there be an output cut in oil, Goldman said. Further, analysts pointed out that global gross domestic product is expected to grow 3.5% in 2019 and “we see no evidence of recession-like demand weakness.” Generally, a recent decline in commodity prices is “too big” since current fundamentals remain intact, Goldman added.

Analysts said they see “the balance of risks as skewed to higher prices” in the energy complex. They look for demand growth to remain resilient while Iranian exports continue to decline through 2019. Further, fiscal strains on OPEC and U.S. shale producers likely will lead to lower oil output.

“Ultimately, we believe that OPEC will start reducing production in December as the fiscal strains at current prices are too elevated to ignore, with WTI [West Texas Intermediate] prices also at levels that would weigh on U.S. economic growth,” Goldman said.

Meanwhile, Goldman Sachs said it looks for a bounce in base industrial metals, which have been hit by the combination of slowing global economic growth, a stronger U.S. dollar and escalating trade tensions between the U.S. and China.

“Contrary to the unfriendly macro environment, the micro fundamentals have been supportive,” Goldman said. “Inventories of copper, aluminum, zinc and nickel have all been falling, indicating that demand has been outpacing supply. While our economists expect continued year-over-year deceleration in China growth and trade disputes may be difficult to resolve in the near term, the market has largely priced in these headwinds, in our view.”