Gold In 2019: Fed Pausing Could Mean Everything For Gold

Editor's Note:Kitco News has officially launched Outlook 2019 - Rush To Safety – the definitive reference for precious metals investors for the new year. We chose this year’s theme as financial markets face growing uncertainty. With volatility on the rise, how do you protect yourself? Click here daily to see updated content.

(Kitco News) - After a disappointing year, gold is looking to recover and make new gains in 2019, with the help of a dovish Federal Reserve, according to analysts, who are not ruling out a pause in the rate-hike cycle next year.

Gold prices kicked off 2018 on a positive note, with futures nearing $1,400 an ounce back in January and hitting a yearly high of around $1,385. A few months after, however, the yellow metal began a prolonged decline, dropping around 14% from the peak. 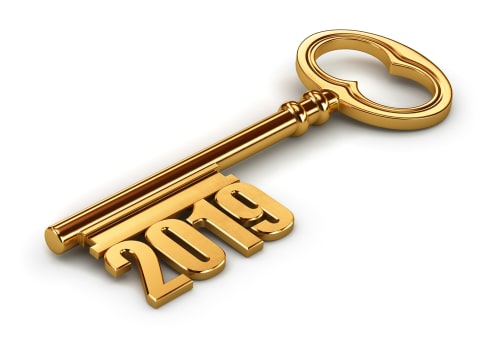 The biggest obstacle for gold prices this year was the strong U.S. dollar, which has taken safe-haven attention away from the precious metals.

“The stars haven’t really been aligned for gold this year. For most of the year, you had this ongoing U.S. dollar strength playing through. We’ve had bouts of volatility, which I quite like for gold, but the U.S. dollar hasn’t sold off,” Pepperston head of research Chris Weston told Kitco News.

But, the good news for gold is that things look very different next year, analysts pointed out, commenting that the U.S. dollar has likely peaked in 2018 and the yellow metal is expected to trade north of the critical $1,300-an-ounce resistance level next year.

While analysts’ projections varied from bearish to bullish, the majority of the outlooks said that gold will perform better next year.

From the bullish perspective, Weston said that for gold to surge beyond the $1,300 level, the market must see a “holy trinity” of catalysts come together — weaker U.S. dollar, lower U.S. inflation-adjusted real yields, and volatility in the equity space. “If we get that, gold is going to have a very nice place to be in 2019,” he said.

Gold is “the-best-of-the-rest” type of investment for Weston, who highlighted that all G10 currencies could look unattractive next year. “There’s nothing that really stands out as your go-to safe-haven place. And that suggests that gold could do well,” Weston said.

Somewhere in the middle of the bullish scale is London Capital Group head of research Jasper Lawler’s forecast, which calls for gold to rise back up over the $1,300 level by mid-2019 and then climb higher and break through the $1,375 level.

“More generally risk-off environment, a pullback in the dollar, and solid physical demand for gold should all be enough to keep it going,” Lawler said. 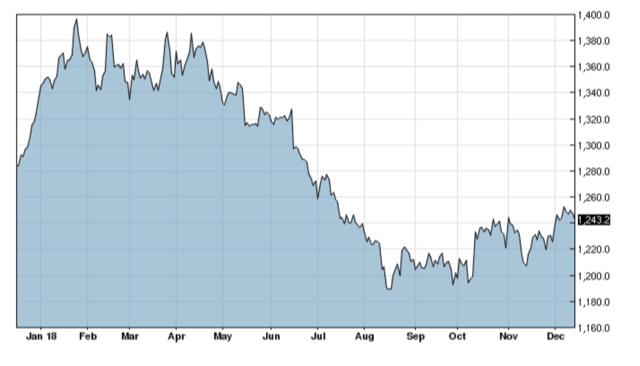 The majority of the analysts Kitco News spoke to were not optimistic when talking about the U.S. economy and stocks in 2019, which means more good news for gold.

“In 2019, we’ll be seeing a slowdown in U.S. economy, a slowdown in the equity market, and continued geopolitical risk,” noted Refinitiv director of metals demand Cameron Alexander. “We’ve been through a period of such bullish equity growth that it probably can’t continue to go on at that level. There will likely be more apprehension and a bit more risk-off sentiment, with people starting to re-direct to other asset classes that offer more protection.”

Refinitiv’s projection for next year is much more subtle, with gold averaging $1,285 an ounce.

An even a more conservative estimate came from Westpac global head of market strategy Robert Rennie. Despite seeing a short period of strength for gold at the beginning of next year, with prices rising to $1,255-$1,260, Rennie projects the yellow metal will retreat back down to $1,180 an ounce by the middle of 2019.

“Essentially gold will remain largely in the range that we’ve seen in the last 6-8 months,” Rennie said. “The only one thing that concerns me is the lack of pickup in gold volatility. This suggests that traditional safe havens are not operating as safe havens. That is why I have a relatively conservative near-term forecast for gold.”

Out of all the bank forecasts Kitco News has reviewed, the most bullish one comes from the Bank of America Merrill Lynch, which projects a rise in gold prices to $1,400 in 2019. Meanwhile, the most bearish forecast, penned by BNP Paribas, calls for gold to fall below $1,200 an ounce.

Watching The Fed And The U.S. Dollar

A large part of future U.S. dollar moves will depend on the level of hawkishness or dovishness of the Federal Reserve.

After Fed Chairman Jerome Powell’s statement at the end of November about the central bank’s rate increases approaching a neutral level, the market began to revise its hike expectations for next year.

Currently, the Fed funds rate is at a target range of 2-2.25%, with another rate hike already priced in for the December meeting as well — likely bringing the interest rate to the 2.25-2.5% range, according to the CME FedWatch Tool.

Next year, however, analysts expect the Fed to slow down and “err on the side of dovishness,” said Kitco’s global trading director Peter Hug.

“It appears that a lot of analysts are now indicating that the Fed will be much more dovish coming into 2019 … which should be negative for the U.S. dollar and in that context we are bullish for gold, at least in the first quarter of 2019. Expect gold to be north of $1,300 in Q1,” Hug said.

The Fed itself is estimating at least three rate hikes next year, which markets are beginning to doubt in light of weaker U.S. economy projected for 2019.

“The Fed will be a little hesitant to raise rates too early. There will be a period of allowing the December hike to settle to see the impact it might have had on economic growth,” Alexander said.

The U.S. economy is expected to slow by the middle of next year, which is likely to make the Fed even more dovish, analysts added.

“We are at a tipping point. It might come in the next couple of quarters or it may be in the next four or five quarters. But, we are getting close to the end of the growth cycle,” Alexander said. “The Fed will be a bit more apprehensive about going too early too hard.”

Since Fed decisions will be data-dependent next year, the exact number of rate hikes to expect is becoming more difficult to predict, according to Rennie, who projects only two more hikes in 2019.

The neutral rate the Fed is targeting at the moment is around 2.75-3.25%, Rennie noted, identifying it as a range where the Fed will simply have to pause. “And that pause could be a lengthy one,” he said.

One final thing to consider when looking at the Fed is the growing divergence between the central bank’s and market’s perceptions when it comes to the U.S economy, Pepperston’s Weston pointed out.

“We are getting to that point where we could see a policy mistake from the central bank. The market is saying that the Fed should end its policy tightening soon. But, at the same time, with unemployment in the U.S. is expected to hit 3.5% next year and, core inflation continuing to be strong, the Fed will likely want to keep its foot on the pedal,” Weston explained.

If the central bank gets it wrong and the market realizes a policy mistake, the U.S. dollar will get “whacked and volatility is going to creep up in a big way,” Weston noted, highlighting that the safest place for investors in 2019 will be in gold.

Geopolitical Tensions Still In The Mix

Rising geopolitical tensions across the world will also offer support to gold next year, with U.S.-China trade war tensions, Brexit, the Italian financial crisis and the Middle East still playing a key role throughout 2019.

Next year will begin with U.S.-China trade developments as the two countries agreed to a 90-day truce on Dec. 1 to iron out a possible trade deal.

“The trade discussions with China is one big factor for gold,” said Alexander. “If they can’t come to a solution and the U.S. does raise tariffs, it will be negative for gold because it will strengthen the U.S. dollar. Conversely, if they do come to an agreement, then it plays into gold’s hands.”

Some analysts were confident that a U.S.-China agreement is not in the cards at all next year. “I still operate of a belief that the U.S. will continue this trade war with China. What we saw at the G20 meeting was simply a period of negotiation,” said Rennie.

“The trade war that we are fighting here (U.S.-China) is all about acts, policies, and practices of foreign governments that U.S. feels violate international trade agreements. Ultimately, we will move to a period where pretty much everything that U.S. imports from China will be tariffed somewhere between 10-25%,” he explained.

From the European issues, Brexit will still be a problem for markets in 2019, but not a significant driver for gold like in 2016, according to Alexander. “In terms of Brexit, it is still a factor because it still generates uncertainty,” he said.

Analysts were also largely optimistic about the demand for gold in 2019, pointing out that more investors will be shifting their assets toward safe-haven options like the yellow metal.

“During the last couple of years, we’ve seen funds redirected to higher-yielding assets, in particularly the stock market. We started to see that unwind a little bit now,” said Alexander.

Gold is already seeing higher prices in December, which is partly due to investors reassessing their portfolios. “We expect that to be a bit of a driver looking forward into 2019. We see an increase in the ETF activity as people start to redirect some of their funds,” Alexander said.

In terms of physical demand, there should be a modest recovery in China — the largest gold consumer in the world, while demand in India will likely remain under pressure, said Alexander.

“With China, we turned the corner after consistent declines in gold consumption since 2013. We’ve seen a slight recovery in jewelry demand in China this year. And we will possibly see the same next year,” he said. “India is going to depend on what the gold price does. If we have slightly higher prices, it will play back to weaker U.S. dollar and more strength in the rupee.”

Official government purchases of gold will continue to increase next year, following substantial gains this year, added Alexander. This trend points to diversification away from holding the U.S. dollar, he said. “Russia is a big player in that market and they are trying to diversify. They don’t want to be holding all their eggs in one basket.”

In 2018, the big players have been Russia, Turkey, and Kazakhstan, buying up a total of 148.4 tonnes of gold during the third quarter of 2018, according to the World Gold Council.