King Dollar To Lose Its Crown In 2019

(Kitco News) - King dollar is preparing to end the year on a strong note, but its reign could come to an end next year as fears of a global economic slowdown could stop the Federal Reserve from raising interest rates aggressively in 2019, according to some analysts.

“If you look back, U.S. dollar rallies end when the Fed ends its tightening cycle,” said Adam Button, senior currency strategist at Forexlive.com, in a telephone interview with Kitco News. “We are at that point or very close to that point.” 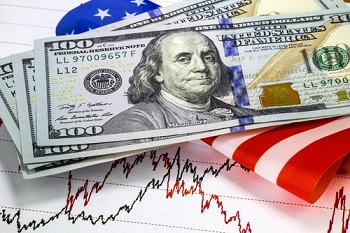 Button’s comments came after the Federal Reserve’s December monetary policy meeting, where they decided to raise interest rates for the fourth time this year, the ninth in the current cycle. However, the pace of rate hikes looks to be slowing as the U.S. central bank, in its latest economic projections, estimated only two rate hikes next year.

Fed Chairman Jerome Powell also noted in a press conference following the announcement that interest rates have hit the lower bound of the central bank’s range of estimates for the neutral rate.

While the Federal Reserve could end its current tightening cycle by the second half of next year, economists are still expecting further tightening from other central banks, in particular, the European Central Bank, which plans to start raising interest rates by the end of the summer.

“While markets are anticipating limited Fed action next year, investors appear to be underestimating the odds of tightening by central banks abroad,” said currency analysts at CIBC World Markets.

Some currency analysts have said that the closing gap in global monetary policy will favor the euro over the U.S. Dollar.

However, less restrictive U.S. monetary policy is not the only part of the equation that is expected to push the U.S. dollar from its current perch. Simon Derrick, chief currency strategist at Bank of New York Mellon, said that investors need to start paying attention to the flattening yield curve, especially as the long-end of the curve underperforms.

“The yield curve could be telling us an awful lot about where the global economy is heading and it's not good news,” he said. “I think the Fed is going to be sensitive to these global factors,” he said.

Derrick added that a weaker U.S. will go a long way to relieve the pressure in emerging markets, especially in Asia, which would help the global growth outlook.

Derrick added that weak economic growth will weigh on U.S. equity markets, which in turn will add further pressure to the U.S. dollar.

“A weaker U.S. dollar would solve a lot of global problems. I think the positive factors would outweigh negative factors,” he said.

Market analysts at TD Securities also expect weakness in the U.S. dollar next year, saying that it looks to fall to the “bottom of the barrel.”

“Global growth will decelerate in 2019, but still generally remain above trend. The US may be one prominent exception, as the combination a fading fiscal sugar rush and rising tariff impacts should push U.S. GDP growth below 2% by end-2019,” the analysts said. “The USD is quite expensive on a range of metrics, leaving it vulnerable to a shift in the perceptions of growth dynamics alongside a correction in the risk-adjusted performance of US equities and credit.”

U.S. Needs To Deal With Its Growing Deficits

Tax cuts introduced at the start of the year, helped to stimulate the nation’s economy and boosted equity markets, which created an attractive environment for the U.S. dollar. However, most economists are expecting that the sugar rush created from the tax cuts is starting to wear off and will be less of a driver in 2019.

On top of that, the U.S. government faces a new problem of growing deficit. In a report in July, the White House Office of Management and Budget released its mid-season review and projected that the U.S. deficit would hit $1 trillion by the end of the 2019 financial year.

Both Button and Derrick said that U.S deficits will be a drag on economic growth.

“The deficit needs to be dealt with, but it will be almost impossible at this point,” said Button.

Does U.S. Dollar Have Any Upside Potential

Derrick said that he sees only one scenario where the U.S. dollar could benefit next year — if there is a full-blown global recession and investors flee to the greenback and the safety of U.S. Treasuries.

“We are going to have to see financial conditions from 2008 before the U.S. dollar looks attractive,” he said. “We don’t see that happening.”

Analysts at TD Securities also see a substantial deceleration in global growth as the biggest threat to their bearish call on the U.S. dollar.

“We note that a strong deflationary shock or major risk-off episode could also see the USD extend its rally beyond our current expectation,” they said. “With risky assets already facing challenges in recent weeks, a deeper pullback in global equities or credit could see stronger flight-to-safety flows.”

Derrick said that he thinks the euro could do well in an environment of slower economic growth.
“Basically Europe just has to stand still and maintain the status quo and the euro would look better than the U.S. dollar,” he said.

Currency analysts at ING see potential in Japanese yen as market volatility picks up through 2019. “We want to hold a strategic long JPY volatility position through 2019. The timing of the upside break-out is uncertain, so we opt for a calendar spread, selling 3m against buying 12m volatility,” the analysts said.

Button said that he sees currency commodities — Canadian dollar, Australian dollar — as outperforming next year, especially in the second half of the year when recession fears appear to be overblown.

For some market analysts, gold and commodities look to do well in 2019 because of a weaker U.S. dollar. Most commodity analysts look for gold prices to average around $1,300 an ounce next year.