Bitcoin To Suffer More Losses In 2019, No Price Bottom In Sight - Analysts

(Kitco News) - After a very painful year that saw prices drop from $17,000 to just below $3,500, bitcoin’s losses are not exhausted yet, according to analysts who see darker days ahead. 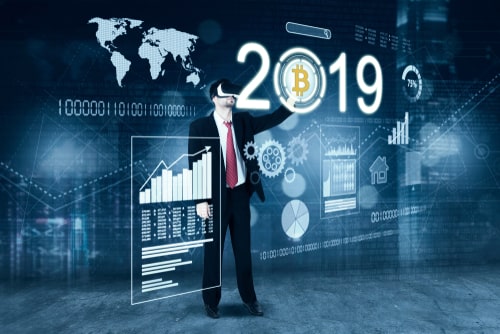 This year has shocked many crypto investors after 2017’s fear of missing out (FOMO), which boosted prices all the way to a record high of $19,511 in December 2017, turned against them.

The biggest losses came in January, March, May, August, and November, with prices eventually hitting the lowest annual level of $3,215 per bitcoin, according to Kitco’s aggregated charts.

Aside from extreme views by bitcoin bulls and bears, the overall trend is that bitcoin will see more headwinds in 2019.

The next level to be breached by bitcoin will be $3,000, Wyckoff noted, adding that it is unclear where the bottom in prices is, which means more losses are likely for bitcoin next year.

“The technical posture for bitcoin-U.S. dollar remains solidly bearish, suggesting more downside price action at least into early 2019. The next downside target for the powerful bitcoin bears is psychological support at $3,000, and below that at $2,500. There are no early chart clues to suggest bitcoin prices are near a bottom,” he said.

The bottom in prices could be somewhere around $1,500, according to Bloomberg Intelligence analyst Mike McGlone.

“There’s little to prevent fading bitcoin prices from reaching the continuous mean of $1,500," McGlone said on a note to his clients. “We’re at a classic psychological stage where the market is reversing the 2017 frenzy.”

“The trend is lower prices, lower volatility, reduced speculation, and the preponderance of stable coins,” he said.

Another bottom for prices could be $1,200 next year, according to U.S. Global Investors CEO Frank Holmes, who cited legalization challenges as the main obstacles holding cryptocurrencies back.

“I would compare the challenge for cryptocurrencies to that of gold. A lot of the price swings have to do with government policies suppressing bitcoin, like gold, as a form of money,” Holmes said. 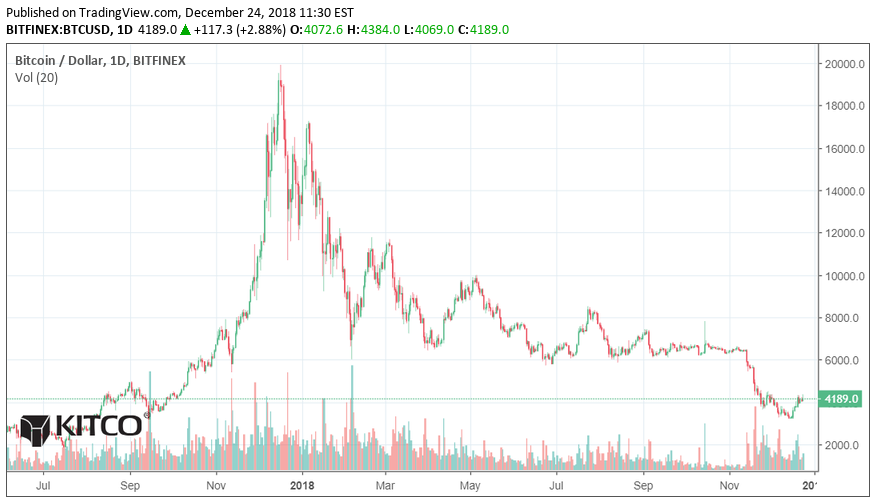 For cryptos to see a more positive environment next year, there will need to be more acceptance in terms of use, Holmes added.

“One of the main obstacles that cryptocurrencies will have to overcome next year continues to be regulation since digital money is still a new concept to many. It will be directly impacted by the coordination with the G20 finance ministers and their plan of action, along with respective central bankers globally,” he said.

Another major obstacle for cryptocurrencies next year is the loss of consumer confidence, Wyckoff pointed out.

“With prices down so much from the early-2018 highs, public confidence in the viability of the cryptos as a long-term asset or store of value is lower than when those currencies were flying high. Keep an eye on news regarding government regulation and/or recognition of the crypto currencies,” he said.

Additional government regulation might even work in favor of bitcoin prices, Wyckoff added, noting that it would suggest governments are coming to terms with cryptocurrency’s credibility and longer-term sustainability.

“Such would then provide more public trust and confidence in the cryptos as a true asset class,” Wyckoff said.

One of the main ongoing problems for bitcoin will continue to be the U.S. regulators expanding their investigation into cryptocurrencies to see whether last year’s massive bitcoin rally was triggered by market manipulation.

On top of that, there’s growing concern around lack of investor protections, said the head of the Securities and Exchange Commission (SEC) in the end of November, noting that it makes the approval of a bitcoin exchange-traded fund unlikely.

“What investors expect is that the trading in that commodity that’s underlying the ETF is trading that makes sense, is free from the risk or significant risk of manipulation,” said SEC chairman Jay Clayton. “Those kinds of safeguards don’t exist in many of the markets where digital currencies trade.”

The #crypto sector will remain volatile as the marketplace continues to evolve, but #investors need to pay attention to the long-term value of the technology, says @CryptoCompare CEO | https://t.co/ODel1EDAUC #RushToSafety #kitconews #bitcoin #ripple #cryptonews #cryptomarket pic.twitter.com/Tb6VUWlXTu

Bitcoin hard forks will also continue to impact prices, including those of Bitcoin Cash and Bitcoin Gold, which became their own cryptocurrencies after splitting from bitcoin due to technological and philosophical differences.

“The hard fork was a key trigger that signaled the technology is way too nascent. You had these dicey characters threatening to destroy each other and institutions said ‘It might be best if we stay away from this for a while’,” said McGlone.

The “hard fork” of bitcoin cash was one of the main reasons behind a big drop in prices in November, analysts said.

These kinds of disagreements create uncertainty and put into question the “limited supply” idea of cryptos.

“This is because, developers, on the one hand, try to convince the world that the supply is limited and, on the other hand, they keep looking at ways of triggering another kind of forks. Forking has become so common that it puts at risk the notion of limited supply altogether,” said ThinkMarkets chief market analyst Naeem Aslam.

On top of everything, there is evidence that the use of bitcoin as a payments platform is declining.

According to a Chainalysis study, the use of bitcoin for commercial payments dropped by nearly 80% from the beginning of the year to September. The research polled 17 bitcoin payment processors to collect the data.

There are a number of analysts and investors who are staying loyal to bitcoin. For example, Former Republican Congressman Ron Paul’s annual Twitter poll once again revealed that his followers preferred the popular cryptocurrency over gold.

The conditions of the poll were: “A wealthy person gifts you $10,000. You get to choose in which form you’ll accept the gift.”

Out of the 94,894 votes cast, the clear favorite was once again bitcoin, as 50% of the respondents chose the cryptocurrency over the other options, revealing how resilient they are in light of extreme price volatility this past year.

Many bulls see this year’s major drop as just another bump in the road, noting that bitcoin is a new invention that a decade ago no one was really talking about.

“The current market decline is just a phase,” Gath3r CEO Reghav Jerath said in a Forbes report. “In its short history Bitcoin has corrected 80-90% many times over. This is just another bump in the road and was overdue.”

A long-standing bitcoin bull, Fundstrat Global Advisors co-founder Thomas Lee is still projecting much higher bitcoin prices by year-end, despite already slashing his forecast from $25,000 to $15,000.

“While bitcoin broke below that psychologically important $6,000, this has lead to a renewed wave of pessimism,” Lee said. “But we believe the negative swing in sentiment is much worse than the fundamental implications.”

Another bull — the chief executive of bitcoin payments processor BitPay, Stephen Pair — is projecting that cryptos will become widely used in just five years’ time, which if realized would push bitcoin prices much higher.

Ripple, the second largest cryptocurrency by market capitalization, had a more decent year than bitcoin, but not without its own massive volatility.

The digital currency stabilized around the $0.30 mark for most of the year, seeing a small uptick toward the end of 2018. Ripple was last trading at $0.41, down 81% on the year.

Traders who prefer ripple over bitcoin and ethereum are optimistic that prices have hit their bottom and are ready for a move up.

Investing Haven’s founding author Taki Tsaklanos said that he is projecting for prices to rise to $20 in 2019.

“We are convinced this is the end of Ripple’s bear market … Ripple is the blockchain or crypto company with the highest potential in the world,” wrote Tsaklanos.

The biggest argument in support of higher ripple prices is cryptocurrency’s focus on revolutionizing the money movement.

Ripple’s most used technology RippleNet, which has more than 100 member banks and financial institutions, enables messaging, clearing and settlement of transactions. It is active in over 40 countries and has new payment corridors in North America, Asia, Africa, Europe, and South America, according to Ripple’s Insights website.

But, everything will depend on how widely ripple will be adopted next year, said The Freedonia Cooperative.

One such adoption was announced this December: “United Arab Emirates-based UAE Exchange and U.S. startup Ripple plan to launch cross-border remittances to Asia via blockchain by the first quarter of 2019,” Reuters quoted UAE Exchange’s group CEO Promoth Manghat as saying.

“We expect to go live with Ripple by Q1, 2019 with one or two Asian banks. This is for remittances to start with, from across the globe into Asia,” Manghat said. 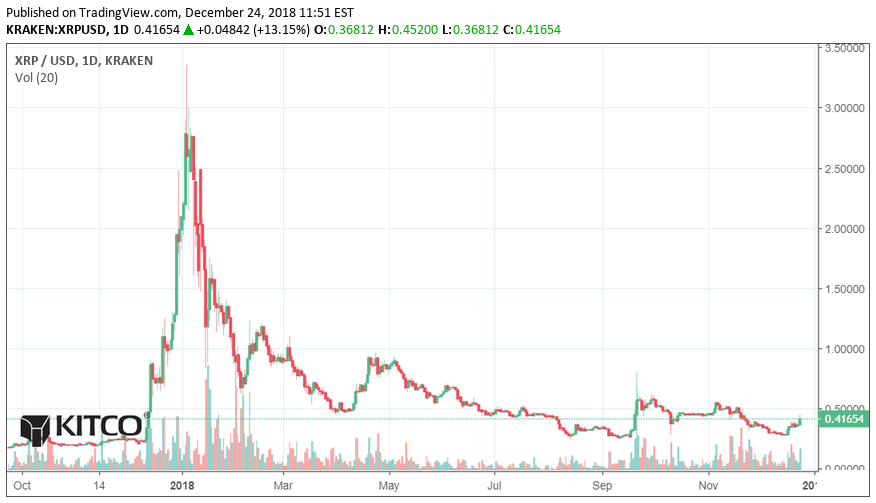 Ethereum, which is the third largest cryptocurrency by market cap, also saw tremendous volatility in 2018, hitting an all-time high of $1,385 on January 14, according to Kitco’s aggregated charts.

Crypto bull Lee sees ethereum rising next year, ending 2019 at $1,900 per coin, which would mean another massive rally next year.

In the meantime, Digital Capital Management managing director Tim Enneking disagrees, stating that: “There are no drivers to push [ethereum] to 40% above its prior all-time high.”

Ethereum’s upward and downward drivers resemble those of bitcoin, analysts said, highlighting government regulation, investor confidence, size of the developer community, and proof of concept as some of the main triggers for next year.

“More and more platforms are using Ethereum as a means of trading …. There’s increased use of smart contracts by Ethereum. And … there’s the decentralization of cloud computing', deVere CEO Nigel Green said in a post on FXEmpire. 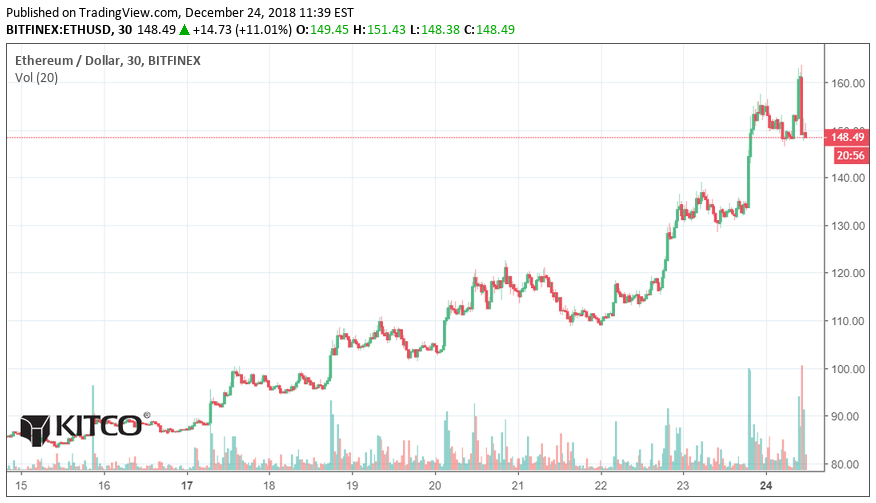