Top Mining Gainers and Decliners in 2018 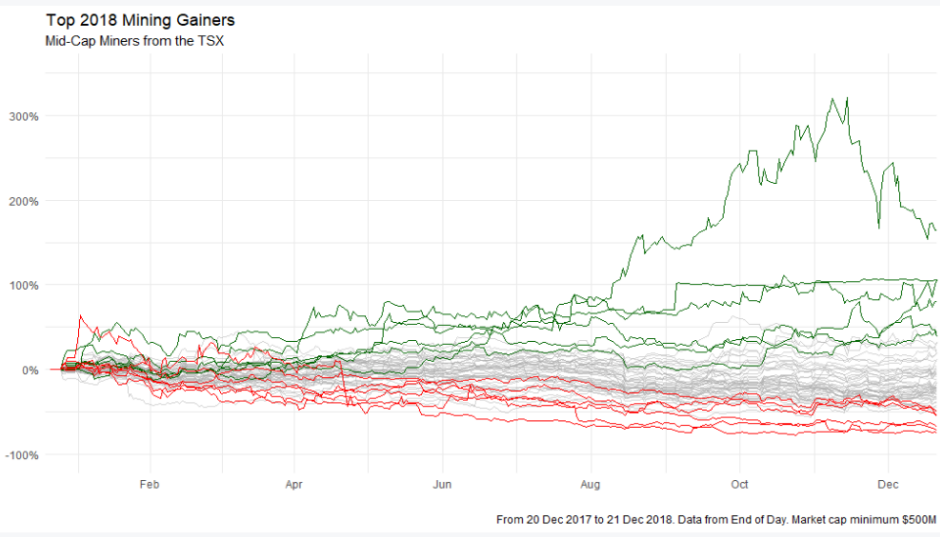 (Kitco News) - The bloom came off the rose for battery-material producers in 2018.

Three of the top six decliners amongst mid-cap miners on the TSX were companies in the battery material space: Nemaska Lithium, Katanga Mining and Orocobre.

Kitco compiled a list of top gainers and decliners assessed on the percentage change of a companies' end-of-day share price between 20 December 2017 and 21 December 2018. Companies with a market capitalization of at least $500 million as of December 2018 were tracked.

Battery-material companies were weighed down by weak commodity prices. Cobalt hit a high of US$43/lb in early 2018 but ended the year at US$25/lb. Lithium was also off. Orocobre's stock sank when it reported that the average cost of a tonne of lithium cabonate dropped 27% to $10,800 in its fourth quarter.

Mining as a whole was down for the year. The TSX Global Mining Index dropped 6.7%. Still it was slightly better than the overall S&P/TSX Composite Index, which fell 8.2%.

Here are the top six mid-cap gainers and decliners: 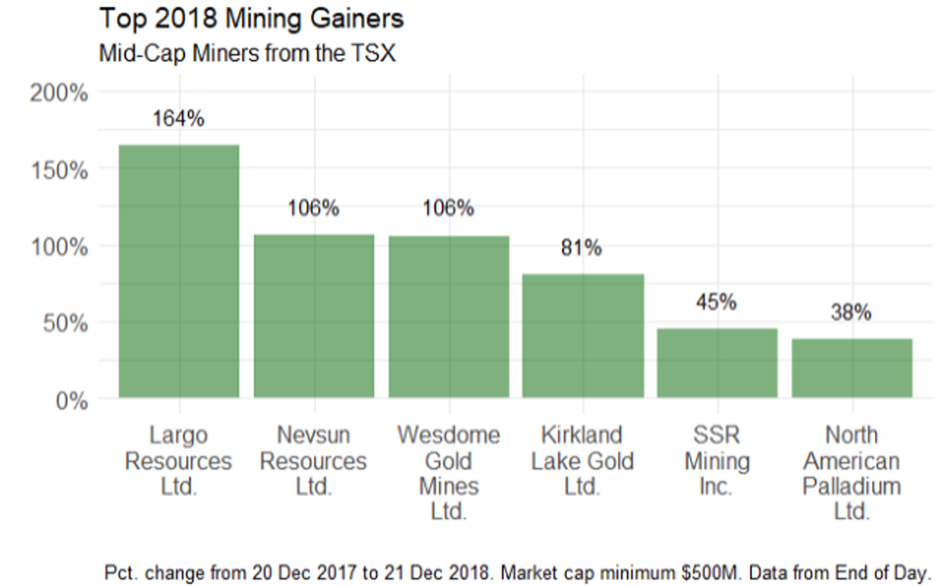 Largo Resources (LGO) 164% - It was a good year for vanadium and a good year for this Brazilian vanadium producer. The silvery-gray metal, which is used to strengthen steel, started the year under $10/lb for China vanadium petoxide (V2O5), but it is now above $20/lb. Largo is expected to produce between 9,150 to 10,150 tonnes of V2O5 in 2018.

Nevsun Resource (NSU) 106% - The base metal miner with operations in Europe and Africa was attractive enough to garner a Can$1.86 billion buyout bid from Zijin Mining, beating out a hostile bid from Lundin Mining valued at Can$1.4 billion. It's copper project in Serbia has an internal rate of return at 3%, one of the highest in the world.

Wesdome Gold Mines (WDO) 106% - This Canadian mid-tier gold miner announced in December that gold production at its Eagle River Complex in Ontario increased 28% over the same period a year ago.

Kirkland Lake Gold (KL) 81% - High grades and increased production pushed this gold miner into Kitco's top gainer list. The company has operations in Canada and Australia. It plans to produce 670,000 ounces in 2018.

SSR Mining (SSRM) 45% - The company is a precious metal producer with operations in Nevada, Saskatchewan and Jujy, a province in Argentina. SSR Mining expects to produce between 190,000 and 210,000 ounces of gold in 2018.

North American Palladium (NAP) 38% - Like vanadium it was also a good year to be producing palladium, which finished the year up US$249/oz to US$1,249/oz. The company, a pure play palladium producer, has been mining the white metal from Lac des lles mine in Ontario for 25 years. 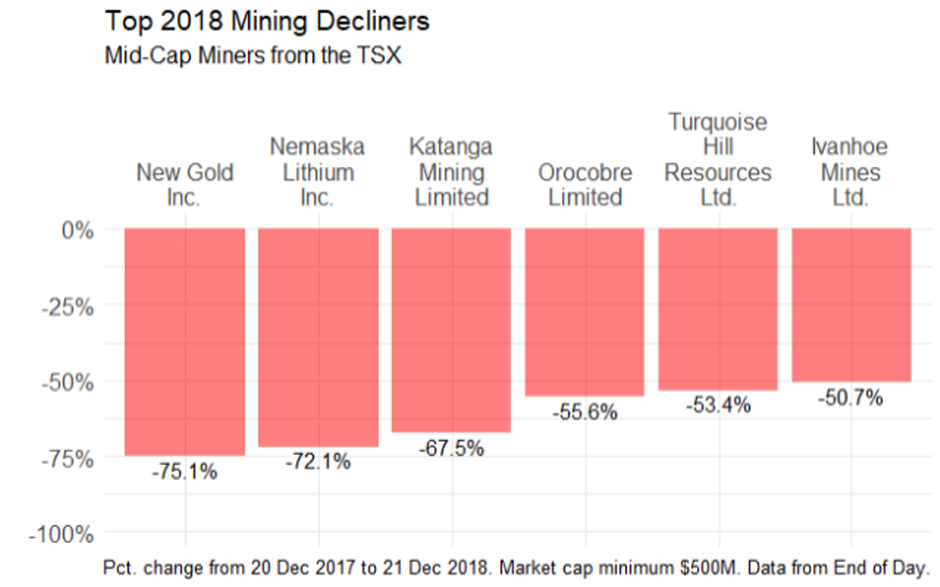 New Gold (NGD) -73% - The Canadian miner struggled with operational challenges at its Rainy River Mine in Ontario. The company cut its forecast production while increasing cost estimates for 2018.

Nemaska Lithium (NMX) -71% - The Quebec-based hard rock lithium producer had to cut the price it was selling its lithium due to a soft Chinese market.

Katanga Mining (KAT) -66% - The Glencore PLC subsidiary was caught in a legal imbroglio. It is accused of masking some less savoury business tactics in the Democratic Republic of Congo. The cobalt miner was also weighed by lousy prices for the blue metal, which was down xx for the year.

Orocobre (ORL) -53% - Like Nemaska Orocobre told the markets in December that it was selling its lithium for less, and the company did not forecast any immediate recovery in prices.

Turquoise Hill Resources (TRQ) -52% - Mines are hard to get off the ground. The giant Oyu Tolgoi mine in Mongolia, which produces copper, gold and silver, is facing production challenges. Mongolia also has an immature mining regulatory regime, which worries investors. Weak copper prices haven't helped.

Ivanhoe Mines -50% - Despite massive copper and PGM projects in Africa, country risk spooked investors. Ivanhoe, run by mining billionaire Robert Friedland, sank early in the year when the markets learned the company may be subject to higher royalties in the Democratic Republic of Congo. Copper also finished the year down, furthering weighing on Ivanhoe.