Gold 'To Take The Bull Baton' From The U.S. Dollar In 2019 - Bloomberg Intelligence 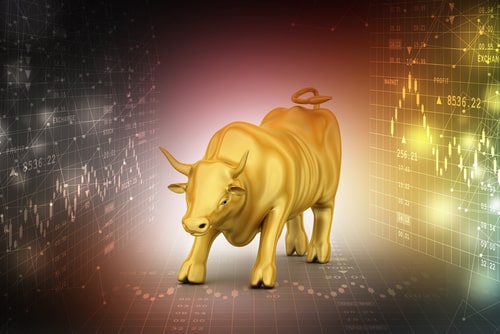 (Kitco News) - After battling some severe headwinds, including a strong U.S. dollar for most of 2018, gold is looking “to take the bull baton from the U.S. dollar and stock market” in the new year, said Bloomberg Intelligence (BI) in its January Commodity Outlook.

Gold prices kicked off 2019 on a positive note, with gold trading near six-month highs during the first trading session of the year, supported by “wobbly stock markets and chart-based buying,” according to Kitco’s senior technical analyst Jim Wyckoff. February Comex gold futures were last trading at $1,282.40, up 0.09% on the day, after reaching a daily high of $1,290.20 earlier in the session.

This positive gold trend should continue as the year progresses, wrote BI’s senior commodity strategist Mike McGlone. Some supporting factors for commodities this year include a weaker greenback, more volatility in the stock market, and a less aggressive Federal Reserve.

“It should play out positively for commodities, with elevated mean-reversion risks in the trade-weighted broad dollar at the highest end-of-year level ever, an extended stock-market bull showing exhaustion and subsiding Federal Reserve tightening. Metals, notably gold and copper, should be primary beneficiaries of a peak greenback,” McGlone said.

It looks like the U.S. dollar has run “too hot” and its strength is unlikely to last, Bloomberg Intelligence pointed out.

“On an end-of-year basis, the trade-weighted broad dollar has never been higher. Sustaining that strength should require continued U.S. stock-market outperformance vs. global equities, and more rate hikes,” McGlone said. “These dollar-bullish drivers are near exhaustion vs. commodities.”

The January outlook also warned that the Federal Reserve rate hikes could reverse if stocks, bond yields and crude oil continue to drop.

“The gold-to-stocks ratio is potentially bottoming from a good support level despite a resilient greenback. A declining U.S. equity market is a primary force to pressure the dollar, supporting metals,” the outlook explained.

On top of that, gold’s extremely compressed range could spark a big rally once the yellow metal begins its move higher, noted Bloomberg.

“Technicals are explosive for the metal, which trades in its narrowest 36-month range in almost two decades,” McGlone said. “The three-year market picture for gold indicates prices migrating higher within an increasingly compressed range, which typically portends a breakout.”