Inflation Will Not Be a Major Issue In 2019; But Gold Can Still Shine - Analysts 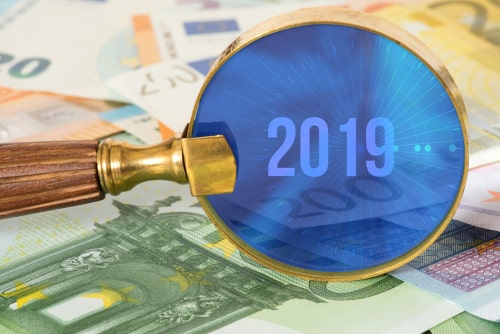 (Kitco News) - While there is strong optimism for gold prices in 2019, the market could be missing one key ingredient: higher inflation pressures.

Heading into the new year, economists were fairly nonchalant on consumer price pressures with many seeing only a modest rise.

Even the U.S. central bank does not see major inflation pressures in 2019. In its latest December economic projection, the Federal Reserve lowered its headline inflation forecast to 1.9%, while noting that core inflation, which strips out volatile food and energy costs, is expected to rise to 2.0%.

The forecasts aren’t too far from the actual data. As of November the Personal Consumption Expenditures Index showed an annual rise of 1.8%; core inflation rose 1.9%. The Fed’s forecasts are in line with consensus forecasts calling for 2% inflation next year.

“The potential for an unwelcome inflation overshoot does not seem very high,” said economists at Nomura. “Inflation expectations are lower than they were in the period 2000-2006 when the Fed believed that inflation was consistent with their mandate.”

Economists at Bank of America Merrill Lynch are also not expecting to see significant price pressures next year even as wages are expected to grow.

“While wages seem on track to head higher, we look for only a modest spillover into core price inflation. Core PCE inflation of 2.2% is expected by the end of 2019 and then hold there for 2020,” the analysts said.

Economists at BNP Paribas said in their latest economic report: “Inflation has passed its peak,” as they forecast at 1.8% rise this year.

However, for the gold market, the laissez-fair attitude regarding inflation could keep prices constrained in its current range.

In a recent interview with Kitco News, KC Chang, senior economist at IHS Markit said that gold prices could struggle to break its orbit around $1,300 without a significant rise in inflation.

According to some commodity analysts, the problem gold faces is that without higher inflation, rising interest rates will continue to push real yields higher, raising gold’s opportunity costs because it is a non-yielding asset. Analysts noted that gold’s lackluster performance in 2018 was in part due to rising real yields, which hit a high of 1.27% in November, the highest level in nearly 8 years.

Although real rates are still relatively low, many investors were spooked by the rate of change seen last year, as real yields rose more than 122%.

While some analysts are keeping an eye on inflation, others argue that it’s not as an important factor for the yellow metal compared to previous generations.

George Milling-Stanley, head of gold investments at State Street Global Advisors, said that gold’s investment appeal has evolved over the years from more than just an inflation hedge. He explained that the yellow metal also provides important portfolio diversification during period of rising volatility and market turmoil.

“We haven’t seen real inflation pressures for nearly 50 years,” he said. “However, over the years gold has still seen significant gains despite the lack of inflation.”

Milling-Stanley said that although inflation is not expected to move significantly higher next year, he is expecting real interest rates to remain relatively low as economic and geopolitical uncertainty keep the Federal Reserve from raising interest rates aggressively next year.

He added that he thinks gold could trade between $1,350 and $1,400 an ounce in 2019 as market volatility weighs on equity markets and the U.S. dollar.

In its December projections, the Federal Reserve saw two rate hikes next year; however, markets are actually pricing in an interest rate cut by the end of 2019.

Inflation Lets The Fed Be More Patient On Rates

In his latest comments Friday, at an event in Atlanta Georgia, Federal Reserve Chairman Jerome Powell, acknowledged growing market concerns for the U.S. economy and the impact of tightening monetary policy.

Although he remained optimistic on economic growth, he said that the U.S. central bank has inflation under control.

He added that because of muted inflation pressures, the central bank can afford to be patient.

“We are listening sensitively to what markets are signaling and will take into considerations growing downside risks,” he said.

Inflation Is Positive For Gold But So Is A Weak U.S. Dollar

Maxwell Gold, director of investment strategy at Aberdeen Standard Investments said that while inflation would be positive for gold in 2019, it is not the indicator that he is watching.

Gold said that he is optimistic on gold this year as recession fears pick up, weighing on equity markets. Although he does not expect the U.S. to fall into a recession this year, a flattening yield curve shows that there is a growing risk.

He added that the growing threat will force the Fed to raise interest rates less than it expect, which will weigh on the U.S. dollar.

“My base case does not call for a recession but markets will remain volatile as it reprices risks after years of compliancy,” he said. “Volatility remains in play in 2019 and that will benefit gold.”

Looking at inflation, Gold said that he doesn’t see a significant rise in price pressures as lower oil and energy prices will counter-balance inflationary pressures from the ongoing global trade dispute.