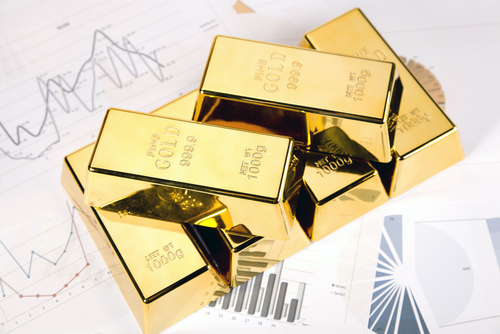 (Kitco News) - Gold’s momentum is to the upside, with prices potentially hitting $1,450 by the end of the year, according to one precious metals analyst, who says investors are “incredibly underexposed to gold.”

There is a substantial portfolio reallocation happening in financial markets and it is working in favor of gold, Jordan Eliseo, independent precious metals analyst, told Kitco News on Monday.

“Gold in U.S. dollar terms could very easily head to $1,400-$1,450 an ounce by the end of the year, which is around 10% from here,” Eliseo said. “We will see people incrementally adding to gold for diversification purposes. Right now investors are incredibly underexposed to gold and they are realizing that equities are still expensive, bonds are not offering much in a way of yield, and real cash rates are still very low all around the world.”

Gold’s Is Watching The Fed

The gold price is watching what the Federal Reserve does, Eliseo pointed out, noting that even if the U.S. central bank raises rates twice this year, the yellow metal won’t budge.

“The market has now priced out expectations of any further rate hikes. Even if the Fed was to hike once or twice, it wouldn’t really hurt gold too much. And with volatility now back in play in the equity markets, we are going to see enough demand to push prices higher,” Eliseo said.

But, the Fed is most likely to listen to markets’ hesitations and adopt a more dovish approach in 2019, added Eliseo.

Following a rally at the end of the year, gold is consolidating and finding its strength right below the key psychological resistance level of $1,300 an ounce.

“Gold will face some resistance around $1,300, especially after it rallied so fast in December when equities were off, the VIX index spiked, and the market completely re-priced its expectations to what the Fed will do this year,” Eliseo explained. “Gold will likely spend a bit more time consolidating the most recent gains, but the momentum is definitely to the upside now, which is good for precious metals investors.”

Central banks will continue to support demand for gold in 2019 as emerging markets work to diversify their foreign exchange reserves, Eliseo added.

“In 2018, central banks picked up the better part of 500 tonnes of gold. I expect they will do that again this year. That will provide support for prices,” Eliseo said.

This trend is not changing any time soon, he noted.

“There is no reason to think they will want less gold this year than they did last year,” Eliseo said. “Even though central banks from emerging markets have been buying a few hundred tonnes every year for the last decade, most still have very low gold holdings, especially relative to their developed market counterparts.”

Gold demand will also be carried by consumers in Asia and the Middle East, according to Eliseo.

“Gold is doing what it has done for many years. It is providing a far more stable savings asset for people than their national currencies and therefore it will continue to be the favorite among consumers in China, India and the Middle East,” he said.

U.S.-China Trade Negotiations Should Be On Your Radar

One of the most burning geopolitical issues on the docket this year is the U.S.-China trade war, which is unlikely to be resolved this year, Eliseo highlighted.

“As rhetoric from both sides potentially heats up, that is one key risk that investors will have to live with. You can already see China starting to slow down and there are knock-on effects in Europe. Latest economic figures out of Germany were disastrous. Investors will need to hedge against negative outcomes from that for some time to come,” he said.

In terms of the impact on gold, Eliseo is a believer that gold and the U.S. dollar will rally at the same time if the U.S.-China trade war escalates.

“What was really interesting about the second half of last year is that gold rallied quite substantially during the last few months of 2018 and the dollar didn’t sell off,” he stated. “My view is that gold and the dollar will rally together if things get worse.”