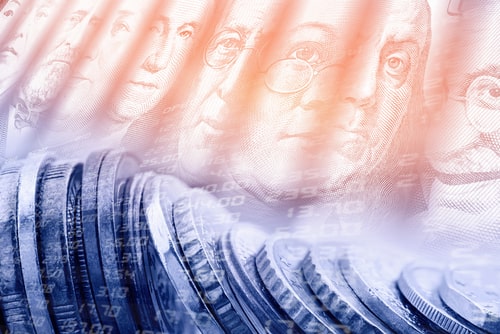 (Kitco News) - If the central banks around the world “catch the ‘gold bug’,” and continue to increase their official gold purchases, it could push the precious metal’s prices above $1,400 an ounce by 2020, according to TD Securities.

“Strong official sector gold purchases open up the possibility that prices can move significantly above our projected $1,400/oz target in late 2020,” TD Securities head of global strategy Bart Melek wrote in a report published on Thursday.

“We expect range-bound trading in the near-term, as the greenback consolidates at somewhat lower levels, US monetary policy remains ambiguous, albeit more dovish than before, and China/EM economic and currency risks still loom,” Melek said. “The same factors that have weighed on the yellow metal for much of last year, and that will keep gold in a range-bound trading pattern for now, are slowly dissipating, which should lift prices near $1,400/oz into 2020.”

There is evidence that central banks are stepping up their bullion purchases, TD Securities pointed out.

“Central bank gold holdings have grown by a dramatic 13 percent (roughly 3,900 tonnes) since the lows recorded back in 2009 and are expected to grow by another 800 tonnes over the next two years,” Melek wrote. “In addition to continued purchases by Russia, Turkey, Kazakhstan and India, now includes China— the yellow metal could well move above our positive projections.”

The bank describes gold as nobody's liability and cites several reasons why central banks from around the world would be interested in increasing their official gold reserves, including a multipolar world that the U.S. will need to learn how to share with growing Chinese influence.

“The desire to diversify central bank FX portfolios from the USD, which still represents over 60 percent of global FX reserves, is one of the key reasons to buy gold,” Melek wrote. “The U.S. [will] likely [be] sharing its superpower status with China (possibly India over the long term), [and] gold’s reliability, time-tested ability to preserve wealth and almost universal acceptance makes it a good reserve asset.” 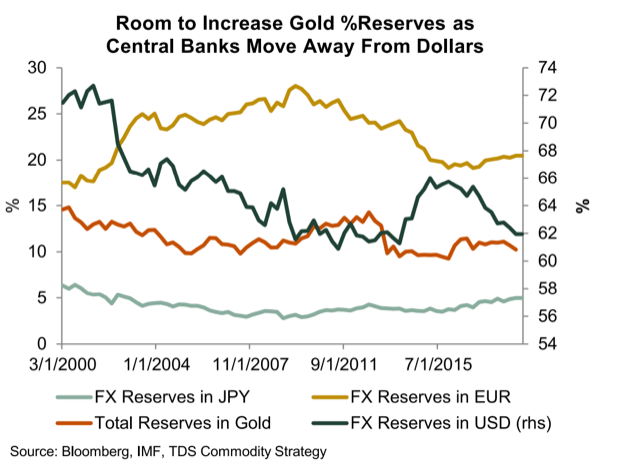 And there is a lot of “room to grow” in terms of additional gold purchases, added Melek, noting that gold currently amounts to about 10% of total global reserves.

“China, Russia, India, Mexico and other key emerging nations hold only a fraction of their reserves in gold — certainly a much lower proportion than the US, Germany, Italy and France.” 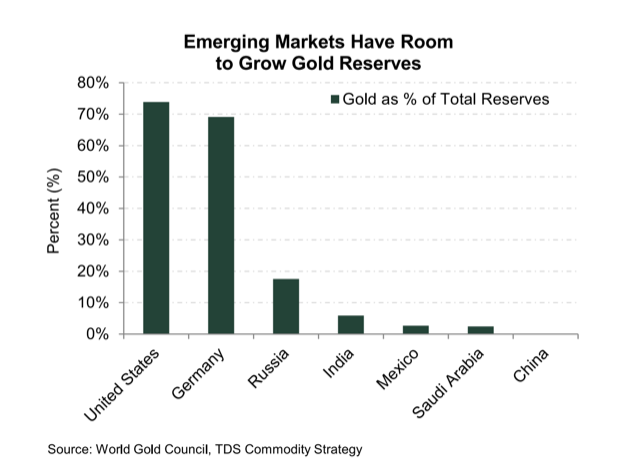 Aside from the well-known buyers, such as Russia and Turkey, other new central banks began to participate as well, including Egypt, Poland, Hungary, India, Indonesia, Thailand and the Philippines.

“China announced a 9.95 tonnes increase in its holdings for the first time since mid-2015,” he wrote. “Thus far, China’s gold reserves remain very small, standing at only 2% of its overall foreign exchange reserves. Many believe that it is trying to accumulate reserve levels similar to those held by the US, Germany, France and Italy, where gold’s share of national forex reserves is over 60%. However, this remains uncertain.”

The most important aspect of this for gold prices is that additional bank purchases will limit physical supply, the report highlighted.

“Official sector purchases of metal can play an important role in tightening physical markets,” Melek said. “Prices can move materially higher when central bank buying and increased demand due to macro factors such as a weakening USD or moderating real interest rates happen in lockstep.”

And it looks like the macro environment will start boosting gold in the end of this year as well as next year, according to Melek.

“As markets become convinced that the Federal Reserve tightening cycle is done, a weaker USD and a materially slower US growth profile should again raise equity correction risks in the latter half of 2019, prompting the yellow and white metals to jump higher again,” he said.