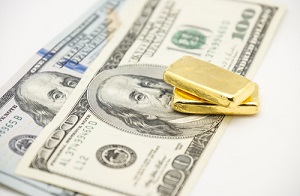 (Kitco News) - A slowdown in the global economy and skittish investor sentiment will continue to push gold prices higher through 2019, said one precious metals analyst.

In a telephone interview with Kitco News, Chantelle Schieven, head of research at Murenbeeld & Co, said that her firm’s base case looks for gold prices to average the year around $1,330 an ounce; while the estimate doesn’t sound so bullish, the firm sees a 40% chance that its bullish scenario works.

“We do think there is a very good chance that gold prices push above $1,400 an ounce by the second half of the year, but it all depends on the U.S. dollar,” Schieven said.

On the bearish side, the firm sees only a 10% chance of gold prices dropping below $1,200 an ounce.

Looking at the U.S. dollar, Schieven said that she expects the greenback back to struggle as the Federal Reserve seeks to slow down its monetary policy cycle due to a slowing economy.

“The geopolitical climate is very uncertain right now. I think we are entering a cycle where investors will be very nervous. The Fed will be sensitive to this nervousness and that will be bullish for gold,” she said.

Schieven said that in the current environment, the firm forecasts the Federal Reserve to be on hold for most of the year, and will only raise interest rates once in 2019.

“The government’s debt is starting to become a very real problem,” she said. “Rates need to stay low because of all the debt that is out there. The Federal Reserve can’t afford to normalize rates and the government won’t be able to inflate its way out because there is no inflation.”

With the Federal Reserve expected to tap the breaks on monetary policy, equity markets could rise as liquidity flows back into markets; however, Schieven said that this will be less of a hurdle for gold than it was in 2018. The firm sees gold and equity markets rallying in tandem in 2019.

“Although equities could push higher this year it won’t be an easy ride,” she said. “Volatility has been so low for so long that when it rises investors tend to overreact and that will be good for gold.”

Although Murenbeeld & Co is expecting to see the U.S. economy slow in 2019, Schieven said that they don’t see a very high risk of a recession, even as the yield curve continues to flatten.