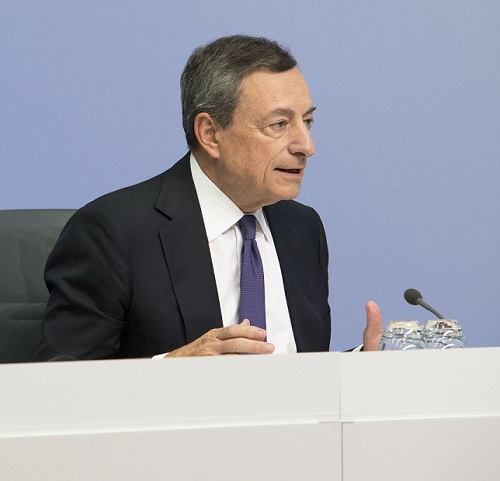 (Kitco News) - The gold market is trying to push back against the U.S. dollar after the European Central Bank raised concerns about increasing threats to the region’s economy.

The euro was hit with strong selling pressure against the U.S. dollar after ECB President Mario Draghi said in his regular press conference that persistent uncertainty is weighing on euro-area growth.

“The risks surrounding the euro area growth outlook have moved to the downside on account of the persistence of uncertainties related to geopolitical factors and the threat of protectionism, vulnerabilities in emerging markets and financial market volatility,” he said in his opening remarks.

The comments come after the central bank left interest rates unchanged but reiterated its stance that it looks to raise interest rates in the second half of the year.

“The Governing Council expects the key ECB interest rates to remain at their present levels at least through the summer of 2019, and in any case for as long as necessary to ensure the continued sustained convergence of inflation to levels that are below, but close to, 2% over the medium term,” the bank’s policy statement said.

Despite the unchanged forward guidance, Draghi said that the committee was unanimous in its decision to highlight ongoing growth risks.

The comments have helped briefly push U.S. Dollar index in the cash market to its highest level since Jan. 3; however, some of that strength has been short-lived with the $DXY last trading at 96.27 an ounce, up 0.17% on the day. Meanwhile the gold market has managed to bounce off its session lows, as February gold futures last traded at $1,281.30 an ounce, down 0.21% on the day.

According to some economists, after listening to Draghi’s comments, markets will have to wait until March when the ECB releases its updated economic projections to get a better sense the direction of European monetary policy.

Although Draghi said that the risk to the European economy has increased, he said that the committee sees a low chance of a recession. He added that the labor market remains strong and nominal wages continue to increase, which should push inflation higher.

“Looking ahead, the euro area expansion will continue to be supported by favorable financing conditions, further employment gains and rising wages, lower energy prices, and the ongoing – albeit somewhat slower – expansion in global activity,” he said.