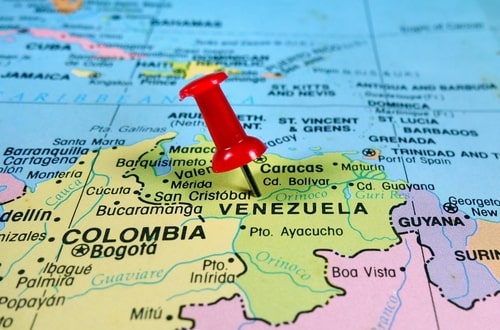 (Kitco News) - Venezuela’s gold saga is far from over, with this week’s reports claiming that President Nicolas Maduro's administration is getting ready to ship 20 tonnes of gold out of the country.

The reports originated with Venezuelan politician and former central bank director Jose Guerra, posting a tweet on Tuesday, stating that the Russian Boeing 777 has landed in Caracas this week and was there to transport 20 tonnes of gold from the country’s central bank vaults.

The evidence supporting the tweet is still unclear. But, the headlines reporting on the event are popping up all across the globe.

Bloomberg provided a number of reasons why Guerra could be right: “For one thing, Guerra is a former central bank economist who remains in touch with old colleagues there. For another, a person with direct knowledge of the matter told Bloomberg News Tuesday that 20 tons of gold have been set aside in the central bank for loading.”

The source also confirmed to Bloomberg that the 20 tonnes of gold, which is worth about $840 million, represents 20% of Venezuela’s gold holdings that are being stored inside the county.

Russia, however, has denied these reports, with Presidential spokesman Dmitry Peskov saying on Wednesday that “there is no such information” and that “it is necessary to be very cautious about different hoaxes.”

The development comes following news reports that the Bank of England has blocked the embattled Venezuelan President Nicolas Maduro’s officials from withdrawing $1.2 billion worth of gold being stored in the vaults of the U.K. central bank.

With Venezuela’s economy in crisis, the country’s debts worth billions have been piling up, especially from countries such as Russia and China.

On Tuesday, Russia said it foresees that Venezuela will have problems repaying its debt, with Russian Deputy Finance Minister Sergei Storchak telling Russian media: “There will probably be problems … Everything now depends on the army, on the soldiers, on how true they will be to their service and oath.”

Venezuela owes Russia $3 billion and has been paying back about $100 million twice a year, Storchak said, with the next installment due in March.

Venezuela is currently in a political crisis as well, with the U.S. and many other Western countries supporting Venezuela’s self-proclaimed interim president Juan Guaido.

In its most recent announcement, the White House said that the U.S. President Donald Trump spoke with Guaido on phone on Wednesday, reiterating his support for the “fight to regain democracy.”

On top of that, the U.S. National Security adviser John Bolton tweeted on Wednesday, warning traders not to get involved with Venezuelan gold or oil.

“My advice to bankers, brokers, traders, facilitators, and other businesses: don’t deal in gold, oil, or other Venezuelan commodities being stolen from the Venezuelan people by the Maduro mafia. We stand ready to continue to take action,” he said in a tweet.