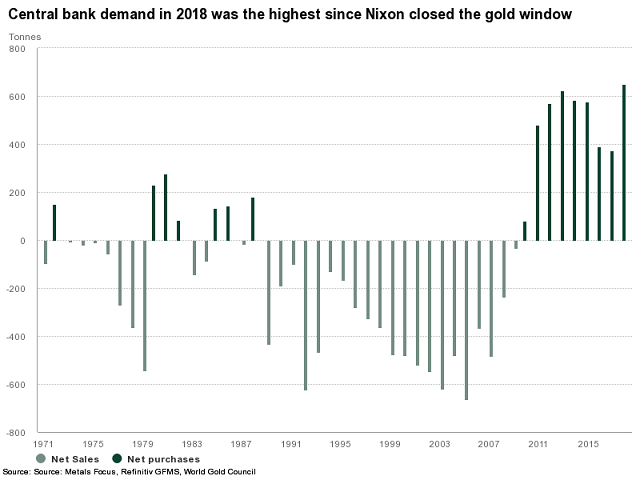 (Kitco News) -Central banks’ renewed appetite for gold is here to stay as official purchases are expected to provide a solid long-term base for the gold market, according to one executive at the World Gold Council (WGC).

In an Telephone interview with Kitco News, Juan Carlos Artigas, director of investment research at the World Gold Council, said that although central bank gold purchases hit their second highest level in history, it is a trend they have seen develop for the last nine years.

The comments come after the WGC released quarterly report on demand trends, which said that central banks bought 651.5 tonnes of gold in 2018, the largest increase in global reserves since 1971

“Some central banks have been buying gold for a few years now, and now there are a few new faces that are entering the marketplace,” he said. “We think this buying trend will continue as we see a diverse group of central banks paying more attention to gold.”

Artigas said that gold is a natural asset for central banks as there are few alternatives in the marketplace. While the U.S. dollar is not expected to lose its reserve currency status anytime soon, Artigas said that many countries are worried that they are too exposed to the U.S. dollar. At the same time, the euro has sovereign debt issues and growing economic growth concerns, which is why it is not an attractive asset.

Central bank gold demand helped to boost overall gold consumption by 4% for the year. In its report, the WGC said that global gold demand rose to 4,345.10 tonnes in 2018, up from 4,159.9 tonnes reported in 2017. However, despite the strong demand, gold prices fell more than 1% for the year.

Although the price decline was disappointing, Artigas said that investors need to keep their focus on gold’s long-term potential. He added that strong central bank demand created a solid base for the market and prices.

“We saw investors jump into gold in the last quarter of last year as market volatility picked up and we expect that trend to continue through 2019,” he said. “There is uncertainty in the system and we think because of that investors will turn to gold.”