Copper To Rise More Than 60% In 6 Years - Capital Economics 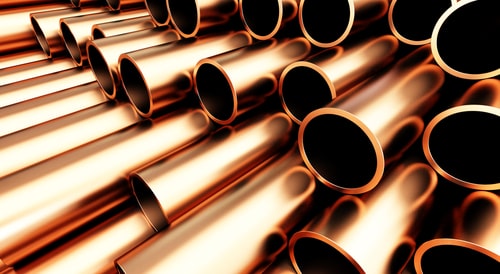 (Kitco News) - Copper prices will surge in the next six years, peaking at $10,000 per tonne amid lack of supply and increasing demand for green technology, Capital Economics said in a report.

“Constrained supply growth and surging demand from electric vehicles mean that we think that the price of copper will rise by over 60%, to nearly $10,000 per tonne, by 2025 … This rally is almost three times higher than consensus estimates,” Capital Economics senior commodities economist Ross Strachan wrote on Thursday.

The supply deficit will continue to support higher prices until 2027, the report said.

“A price of around $7,000 per tonne in real 2018 terms is needed to encourage enough new mines to balance the market. Prices are currently around 15% lower. Moreover, even when investment decisions are made, it will typically take at least three years before production begins,” Strachan stated.

Demand for copper is set to increase in the next two decades, growing on average by 2.3% per year, the report added.

“Copper is used heavily in several green technologies that are already growing rapidly but look set to gain critical mass over the next decade. The most prominent is electric vehicles, which use a lot more copper than cars with internal combustion engines,” Strachan said.

Copper will also be used more and more by developing countries when it comes to infrastructure, Capital Economics noted, highlighting China’s Belt and Road Initiative.

On top of that, once copper prices rise this time around, the market will be limited in its substitution choices, making copper hard to replace with another metal, the report pointed out.

“Unlike when copper prices rallied so robustly before the global financial crisis, we think that a return to those price levels will not spark substantial substitution. The low hanging fruit for substitution, to aluminium and plastics, has already occurred,” Strachan explained. 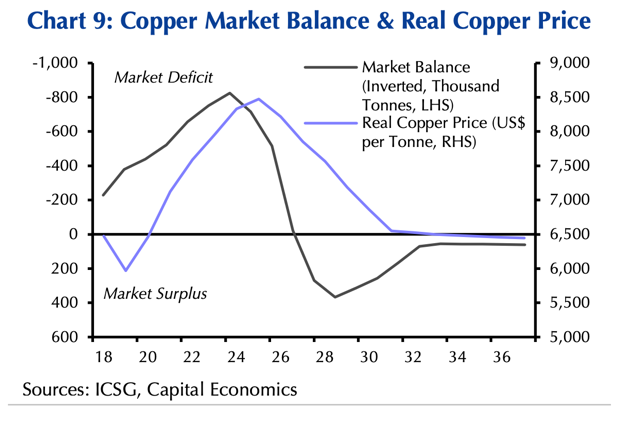 However, the $10,000 per tonne price level marks a peak in copper prices for the next two decades, warned Capital Economics.

“For the final decade of our forecast period we think that the price of copper will average around $6,700 per tonne in real 2018 terms,” Strachan described.

Once prices reach $10,000 per tonne on a nominal basis, mines will have an incentive to increase supply by developing new projects or expanding the existing ones, the economist added.

“Production growth will recover. Furthermore, the price will crimp demand as it encourages some miniaturization and substitution. These forces should return the market to a small surplus by 2028,” he said.