Only A Matter Of Time Before Gold Beats The U.S. Dollar - Analysts 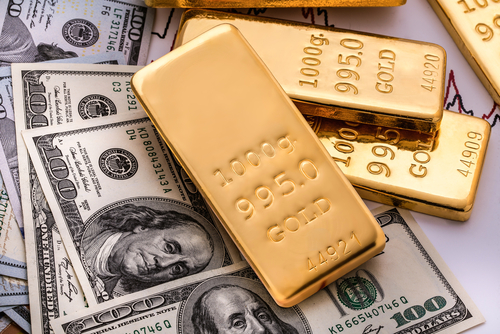 (Kitco News) - The gold market is ending the week near the top of its two-week range and some analysts expect prices can continue to climb higher as the U.S. dollar is in its last gasps of a rally.

Commodity analysts have noted that gold’s recent bullish moves are impressive, as they have been made in the face of continued U.S. dollar strength. Although momentum has not been strong, gold has managed to hold above the critical psychological level at $1,300 an ounce. April gold futures last traded at $1,323.90 an ounce, slightly up from last Friday’s settlement price.

Meanwhile the U.S. Dollar Index is ending the week at the highest level since the start of the new year, last trading at 97.09 points, up nearly 0.5% since last week.

While it’s not uncommon for the U.S. dollar and gold to rally together, the trend has never proven sustainable. Looking ahead, many analysts think that gold will eventually beat the U.S. dollar. Analysts expect gold prices to at least grind higher in next week’s shortened trading week due to President’s Day long weekend.

Eugene Weinberg, head of commodity research at Commerzbank, said that he sees growing headwinds for the U.S. dollar, which will continue to benefit gold.

“There are a number of factors weighing on the U.S. dollar: growing recession fears, weaker manufacturing data and a Federal Reserve that will not be raising interest rates anytime soon,” he said.

U.S. Dollar Is On Thin Ice

David Madden, market analyst at CMC Markets also said that he thinks that despite gold’s weak momentum, it will eventually win out over U.S. dollar strength.

He added that the U.S. dollar is benefiting more from weaker global currencies than legitimate strength. While the Federal Reserve has nearly established a neutral outlook on interest rates, other central banks have turned even more dovish.

“This less-dovish sentiment will continue to support the U.S. dollar but it will be difficult for the currency to rally and I think this is where gold benefits,” he said. “Don’t expect to see any major break outs, but the upward trend in gold is here to stay.”

Mike McGlone, senior commodity strategist at Bloomberg Intelligence, said that he also sees the recent rally in equity markets supporting the U.S. dollar, but this will only prove to be a limited catalyst.

“The dollar is on thinner ice, in our view, with its primary remaining support factor -- the outperforming stock market -- running into layers of resistance,” he said in a report Friday. “A greenback rally likely requires the S&P 500 vs. world gauge to sustain above 2018's record high. We view mean reversion as the greater risk.”

The Federal Reserve On Hold For The Foreseeable Future

For a lot of analysts, the Federal Reserve’s “patient” policy, officially established after last month’s monetary policy meeting is the biggest hurdle that the U.S. dollar faces this year, and the biggest driver for gold prices.

Not only does a dovish Fed pose a headwind for the U.S. dollar, but it means that bond yields will also be lower and as inflation rises, real yields will be low.

Maxwell Gold, director of investment strategy at Aberdeen Standard Investments said low real yields are positive for gold because it lowers the yellow metal’s opportunity costs. Gold said that for investors, gold is an attractive alternative asset in an environment of low bond yields and volatile equity markets.

He added that it will be difficult for the Federal Reserve to raise interest rates as global recession fears continue to rise.

“I think we have seen a peak in real interest rates and that will be good for gold,” he said.

According to some analysts, gold has been able to hold its own against the U.S. dollar because of growing recession fears. This past week saw two Nobel-prize winning economists warne investors about the growing threat of a recession.

“It seems like there has to be an elevated probability of a recession this year or next year,” said Robert Shiller during a panel discussion during the InsideETFs conference in Hollywood, Fla.

Earlier in the week, Paul Krugman said that there is a significant chance that the world falls into a recession this year.

Jerry Hicks, sales & business manager at the Perth Mint said that gold is the best hedge against an impending recession because it is not strongly correlated to other assets.

Gold Has Momentum To Move Higher

Colin Cieszynski, chief market strategist at SIA Wealth Management, said that a break above $1,320 could initiate a rest to long-term resistance at $1,360.

“Technically, gold looks strong and momentum doesn’t suggest that it is overbought,” he said. “Gold looks good as it looks like all the tailwinds for the U.S. dollar have peaked.”

It is a relatively quiet week for economic data with both Canada and U.S. markets closed Monday.
However, markets will be closely watching U.S. durable goods data Thursday to gauge the health of the manufacturing sector.

Preliminary and regional manufacturing data will also be released during the same day. Followed by important home sales data. The housing sector has been a significant weak spot in the U.S. economy as fewer consumers have bought homes, driven away because of rising interest rates.

Market players will also be anxious to read the minutes from the Federal Reserve’s January monetary policy meeting to determine just how dovish the committee is after it acknowledged growing economic risks in the global economy.