Why Are Markets Watching The India-Pakistan Flare-Up? 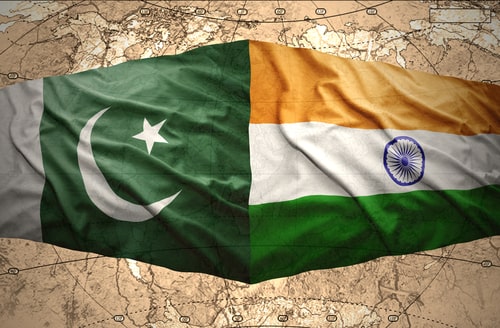 (Kitco News) - India-Pakistan tensions have caught the markets off guard this week, but the reaction has been muted so far, with analysts keeping a close eye on the conflict between the two nuclear-armed countries that can quickly escalate.

On Wednesday, India and Pakistan both stated that they shot down each other’s fighter jets. Later on, it became known that Pakistan also captured an Indian pilot in response to India launching airstrikes in Pakistan territory for the first time since the India-Pakistan war of 1971.

What came after was both countries ordering more air strikes and ground troops periodically exchanging fire.

In response to PAF strikes this morning as released by MoFA, IAF crossed LOC. PAF shot down two Indian aircrafts inside Pakistani airspace. One of the aircraft fell inside AJ&K while other fell inside IOK. One Indian pilot arrested by troops on ground while two in area: DG ISPR

Many international flights to India and Pakistan were cancelled and rerouted on Wednesday after Pakistan closed its airspace, including airlines such as Emirates, Air Canada and Qatar Airways.

Tensions between India and Pakistan began to first escalate this year following a suicide car bombing carried out by Pakistan-based militants in Indian-controlled Kashmir on February 14, which killed at least 40 members of Indian paramilitary police.

Quick escalation has forced many countries to speak out and urge restraint, with the White House asking “both sides to take immediate steps to de-escalate the situation.”

U.S. Secretary of State Mike Pompeo said he spoke with Indian and Pakistan foreign ministries in both India and Pakistan and “encouraged both to prioritize direct communication and avoid further military activity.”

U.K. Prime Minister Theresa May also called for de-escalation, stating that “U.K. is deeply concerned about rising tensions between India and Pakistan and urgently calls for restraint on both sides to avoid further escalation. We're in regular contact with both countries, urging dialogue and diplomatic solutions to ensure regional stability.”

Asian stocks edged down on Thursday, following a similar trend on Wednesday. In the meantime, spot gold on Kitco.com was trading at $1,318.30, down 0.06% on the day.

“It’s been incredibly muted. We’ve seen the story coming up before, perhaps not to this scale, and the markets have never really shown a huge reaction to them. I’m very much in the camp that if this becomes an issue, it won’t be a one-day affair,” Pepperston head of research Chris Weston told Kitco News on Wednesday.

If India and Pakistan’s relationship continues to deteriorate and there is a risk of war, markets will speak up, added Weston.

“The more developed markets will start becoming more sensitive to that and we’ll start seeing a big move down in Treasury yields or a big strength in the yen and volatility in other FX markets, and the S&P index,” he said.

But, so far traders are just watching the conflict develop, while trying to read up on the issue.

“Yesterday, when the news was breaking about planes coming down in Kashmir, we didn’t really see much of a reaction in the S&P. I’ve got my eye on it, but I am not putting any money to work on it until the market shows that it sees it as a bigger issue,” Weston noted. “That market is telling you right now that it doesn’t see a nuclear threat.”

Gold is potentially very sensitive to any further escalation, with prices likely to go higher, according to Kitco’s technical analyst Jim Wyckoff.

“The news has Asian stock and financial markets on edge. Any escalation of this situation would prompt safe-haven demand for gold and silver,” Wyckoff said.

More Statements From India And Pakistan

Pakistan Prime Minister Imran Khan has been calling for dialogue, stating that he hopes that “better sense” prevails and both sides are able to de-escalate.

“History tells us that wars are full of miscalculation. My question is that, given the weapons we have, can we afford miscalculation,” Khan said during a televised state address. “We should sit down and talk.”

The Pakistan government’s official Twitter account also published two videos of a man that it claims to be the captured Indian pilot.

The first showed a bloodied and blindfolded man stating his name and service number. And the second reportedly shows the same pilot cleaned up and drinking tea.

There is only one pilot under Pakistan Army’s custody. Wing Comd Abhi Nandan is being treated as per norms of military ethics: DG ISPR Major General Asif Ghafoor#PakistanArmyZindabad #PakistanAirForceOurPride #PakistanZindabad ???? pic.twitter.com/NwfKELb2Tv

India’s foreign ministry released a statement saying that Pakistan’s treatment of the pilot was a “vulgar display of an injured personnel of the Indian Air Force in violation of all norms of international humanitarian law and the Geneva Convention.”

India also demanded that “no harm comes to the Indian defence personnel in [Pakistan’s] custody.”

A response to escalating tensions has been overwhelming on social media, with hashtag #SayNoToWar trending on Twitter. Posts from activists and citizens alike showed people pleading for de-escalation and asking for peace.

Dear @narendramodi
and @ImranKhanPTI kindly stop the war. India and Pakistan both are suffering from thousands issues like poverty, illiteracy, unemployment, castism, untouchability, income inequality & many others. We should fight against the issues not each other.#SayNoToWar pic.twitter.com/PRIhbNXQSY

More than ever, it is now critical that both India and Pakistan show restraint, and heed all those calling for mature diplomacy rather than provocation and aggression. The right to life starts here. #SayNoToWar

If war between India and Pakistan happen, destruction would be so huge neither side would be able to ascertain who has won but humanity will lose.#SayNoToWar

Why we should be worried about India/Pakistan https://t.co/KtrOYnUycr