Gold Above $1,300 As May Suffers Another Heavy Brexit Defeat In Parliament 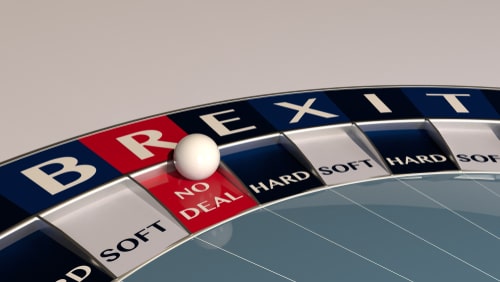 UK parliament voted on Tuesday to reject Prime Minister Theresa May’s Brexit deal by 391 votes to 242 after May said she secured "legally binding" changes to her Brexit deal.

Kitco’s senior technical analyst Jim Wyckoff pointed to lower U.S. dollar as one of the reasons for higher gold prices on Tuesday. “A lower U.S. dollar index on this day and a mild U.S. inflation report are also friendly for the precious metals markets. Gold and silver bulls have regained some technical strength this week,” Wyckoff said in his PM Roundup.

This is the moment MPs voted down the Prime Minister's Brexit deal for the second time, defeating it by 391 votes to 242 #BrexitVote pic.twitter.com/RPvLm2XWe1

The defeat was heavy for May, who warned Parliament that: “If this vote is not passed tonight, if this deal is not passed, then Brexit could be lost.”

Also, the European Commission President Jean-Claude Juncker said on Monday after talks with May that there will be "no third chance” for the U.K. if the deal is voted down again.

Labour's Jeremy Corbyn says UK PM's #Brexit deal is "clearly dead", saying Theresa May has "run down the clock, and the clock has been run down on her"#BrexitVote latest: https://t.co/B1iEVm5bdm pic.twitter.com/PsL8De5COq

The Prime Minister needs to put our city and our country first, and withdraw Article 50.

It’s time to give the British public the final say. https://t.co/f5wROKGFuC

The path forward is unclear, with the U.K. lawmakers scheduled to vote on Thursday on whether Britain should move forward with the exit from the EU without a deal. However, that vote is also expected to be rejected by the Parliament, according to local media reports.

This leaves the U.K. with a few other options on the table, including delaying the March 29 Brexit deadline, calling a snap election, or holding another referendum.

JUST IN: Group of UK lawmakers say they will propose an amendment to Wednesday's vote on no deal proposing that the government should seek an Article 50 extension until May 22nd in order to prepare for no deal #Brexit pic.twitter.com/v5O6xi93W6

Despite May’s last-ditch effort to secure a better deal during a meeting with Juncker in Strasbourg on Monday, critics of May’s proposal were still unhappy with the results.

Labour leader Jeremy Corbyn said the updated deal negotiated by May had “failed” and did not contain “anything approaching the changes” that were promised by the Prime Minister.

The Attorney General’s advice is clear. Nothing has changed. We would still not have the power to independently leave the backstop arrangements and the process could go on indefinitely. This is why I won’t be voting for the withdrawal agreement as it stands. pic.twitter.com/xiQ3JLwlGb

“The legal risk remains unchanged that if through no such demonstrable failure of either party, but simply because of intractable differences, that situation does arise, the United Kingdom would have ... no internationally lawful means of exiting the protocol's arrangements, save by agreement,” said Cox on Tuesday.

Back in January, May’s deal was voted down by 230 votes, with 432 lawmakers voting against and 202 in favor of the deal. This marked the biggest legislative defeat in the U.K. House of Common’s history.

'Tonight we will table a motion for debate tomorrow to test whether the House supports leaving the European Union without a deal on 29th March.' Read UK PM Theresa May's statement to parliament after her #Brexit deal was defeated https://t.co/9DWTLHtq6H pic.twitter.com/B2GOo39pZP