Is Resource Nationalism A Threat To The Mining Industry? 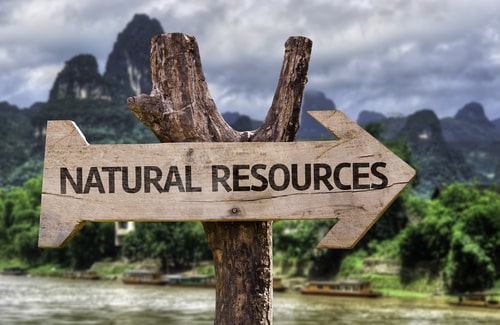 (Kitco News) - Resource nationalism is on the rise in at least 30 countries, with Russia and Democratic Republic of Congo (DRC) joining the list of “extreme risk” nations, which could see governments taking greater control of natural resources, according to global risk consultancy firm Verisk Maplecroft.

“A total of 30 countries have witnessed a significant increase in resource nationalism risks over the last year, including 21 major producers of oil, gas and minerals,” Verisk Maplecroft wrote in a March report, citing its Resource Nationalism Index (RNI).

The firm’s RNI measures “the risk of expropriation, the imposition of more stringent fiscal regimes, and pressure for companies to source goods and services from local providers.”

Last year’s data revealed that Russia and Congo are now among the top eight countries with the highest risk of governments tightening control over natural resources.

“Both have been downgraded to ‘extreme risk’ in the ranking of 198 countries and join a group of eight nations where the risks to business from governments taking greater control of natural resources is highest,” the report said.

Other countries on the list are Venezuela, which shares the top spot on the “extreme risk” index with Congo; Tanzania; North Korea; Zimbabwe; Swaziland; and Papua New Guinea. 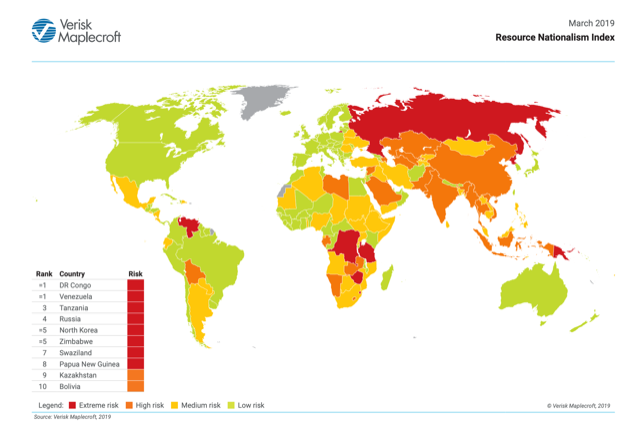 The number one risk to businesses operating in any of the above nations is “creeping resource nationalism,” the report warned.

Congo, for example, has been “squeezing investors,” with its new Mining Code, the risk consultancy firm pointed out.

“[The country] imposed onerous fiscal terms on existing operators and allow[ed] heightened levels of government interventionism in the sector. Since June 2018, when the code came into law, the government has attempted to block commercial asset transfers, tried to usurp operators to glean more profit, and choked exports from a cobalt mine,” the report said. “In fact, the government is likely to include copper as a ‘strategic’ substance that will be subject to the punitive 10% royalties currently levied on coltan, germanium and cobalt.”

However, some countries are seeing an improvement in their rating, including Vietnam and Ecuador.

“Other countries, including OPEC member Ecuador, have made more significant progress. Since President Lenín Moreno came to power in 2017, he has transitioned the government away from the authoritarian left-wing policies of his predecessor, Rafael Correa, towards a more moderate and consensual centre-left administration. Moreno has introduced changes that strengthen democratic norms, restore powers to government institutions and tackle a legacy of systemic corruption. As a result, Ecuador has jumped from ranking 3rd and ‘extreme risk’ in the Resource Nationalism Index two years ago to 46th and ‘medium risk’ in 2019,” the report stated.