Struggle For Gold's $1,300 Level Will End In Win For Bulls - Metals Focus 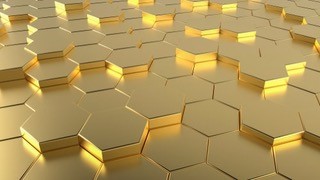 (Kitco News) - A gold rally towards $1,400 an ounce will only be possible at the end of the year, said Metals Focus, citing a struggle around the $1,300 area amid more favorable conditions for the yellow metal.

“Conditions are now becoming more supportive for a late-2019 rally,” the precious metals consultancy said in its Gold Focus 2019 report released on Monday. “For the next six months, [we] see gold trade in a relatively tight range around $1,300; on the upside … prices will probably be capped at last year’s peak of $1,365, while ventures to levels as low as $1,250 can also not be ruled out. A more meaningful rally is then forecast to take place later in the year, when we see prices testing the $1,400 mark.”

Despite the optimistic view towards the end of the year, Metals Focus is cautions in the short to medium term.

“There remain some headwinds on the horizon that should limit gold’s upside and at times fuel liquidations. As such, our price forecast for 2019 calls for a conservative 3% y/y increase, to a full-year average of $1,310,” the report noted. 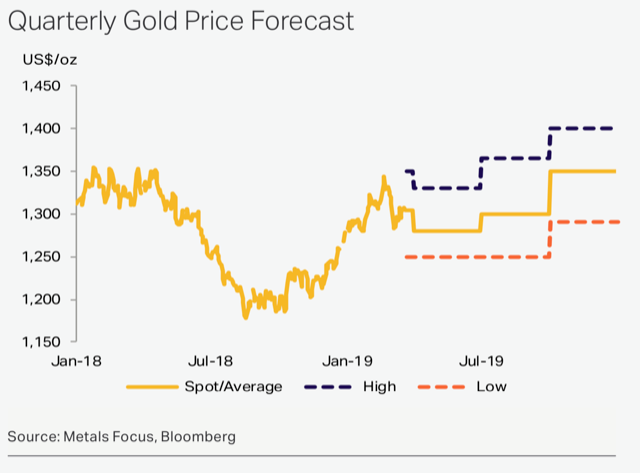 This year’s dovish shift by the Federal Reserve is highlighted as one of the primary long-term reasons for a positive gold outlook.

“Recent comments from Fed officials, as well as FOMC members’ guidance on policy rates, all suggest that U.S. policy rates will remain unchanged for the foreseeable future. Fed fund rates futures are similarly pricing in no rate increases at least for 2019 … This in itself should be positive for gold, as it should encourage investor interest in safe-haven assets,” Metals Focus said.

The report connects Fed’s new stance with slowing global economic growth, which is also supportive of gold in the long term.

“Starting with the U.S., market consensus … is that real GDP growth will slow both in 2019 and 2020 … Elsewhere, the euro-zone performance has (at best) been sluggish and tail-risks in the region abound. Moving to emerging markets … the relatively high exposure that many of their economies have to exports means that growth will be further hampered by trade tensions,” the report highlighted.

Global gold supply is projected to rise 1% to 4,707 tonnes due to high mine production and recycling, according to Metals Focus.

“In 2019, growth in output is expected from West Africa, Canada and Russia, offset by lower production volumes from South Africa, China and Indonesia,” the report pointed out. 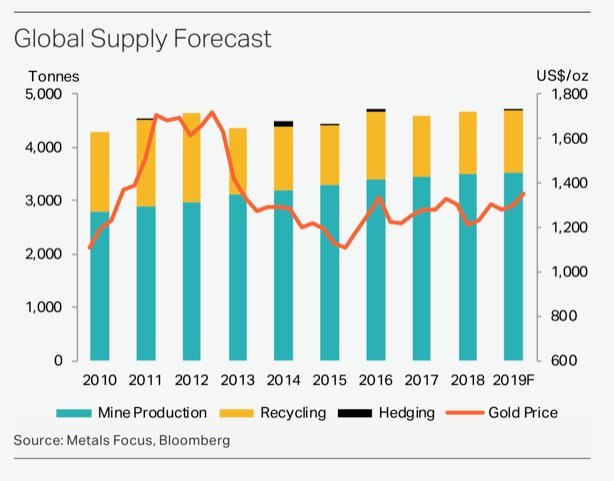 In the meantime, this year’s demand outlook for gold is based on gains in fabrication and investment. Jewelry fabrication is projected to rise 3%, marking a four-year high in 2019 with 2,351 tonnes of gold used.

“The largest increase comes from India, whose 7% gain is based on the government’s focus on improving farm incomes, coupled with tax breaks for the middle class,” Metals Focus said.

In the industrial sector, the demand for gold will be driven by the electronics sector, the report added, citing growing use of the yellow metal in consumer electronics, flash memory, and the automotive segment. 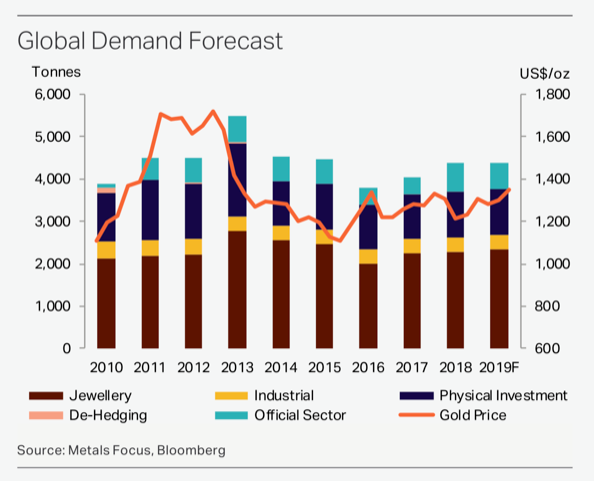 Interest in the physical metal is likely to remain flat this year, Metals Focus stated, highlighting higher demand in Europe, the U.S. and China being offset by major declines in the Middle East, India and Japan.

The central-bank buying, on the other hand, is likely to remain elevated, but lower than the staggering 2018 levels.

“The official sector bought 657t on a net basis during 2018, up by 74% y/y to its highest level since the collapse of the Bretton Woods system in the early 1970s … Russia remained the largest buyer in 2018, while China reported only a modest 10t increase (in December), its first such rise since October 2016,” the report said. “We expect net official-sector buying to remain historically high at 600t in 2019.”