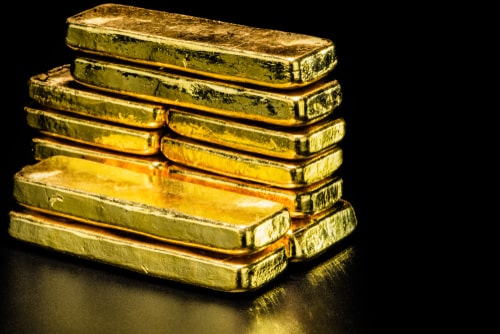 (Kitco News) - The gold market gauge is turning from bear to bull, with the metal most likely heading higher towards $1,400, according to Bloomberg Intelligence (BI).

Gold will not be stuck around the $1,300 level for much longer, with the market waiting on peak U.S. dollar and more volatility in the equity space to push prices higher, said BI senior commodity strategist Mike McGlone.

“Stuck close to $1,300 an ounce in 1Q, gold is set to head for resistance at $1,400 instead of continuing to consolidate and revisit $1,200. It's been six years since gold traded above $1,400 vs. just a few months ago when it was below $1,200, yet headwinds are dropping fast, with a lofty dollar the primary remaining holdout,” BI’s April report stated.

Gold’s set-up looks similar to that of 2002, when the U.S. dollar peaked and the gold market turned bullish, McGlone pointed out.

“A peak in the trade-weighted broad dollar should seal a gold recovery, more so than in 2017. Then, stock-market volatility was still declining toward multi-decade lows while rates and yields were on the rise. The opposite conditions are in place now, with a strong dollar the final pillar for gold,” he wrote.

“Futures have shifted to expectations of a Fed easing in the aftermath 2018's failed gold-bear raid. Managed-money positions on CME-traded gold futures reached the most net short in October, as a percentage of open interest in the database since 2006. In an environment of historically low volatility, such an extreme is a prime candidate for forming a longer-term price bottom. Seemingly unstoppable exchange-traded fund (ETF) inflows indicate endorsement of higher prices,” McGlone explained.

Going from rate hikes to rate cuts could be gold’s strength and dollar’s unwinding, the strategist stated.

“If futures are right and rate cuts are next, a peak dollar is likelier, supporting gold and precious metals. The correlation between metals and the dollar is one of the most negative,” McGlone said. “We expect last year's strong dollar performance to have marked a last gasp for the bull market, and for the greenback to remain near the bottom of 2019 performers, which is primarily supportive of metals.”