It Will Take Several Attempts To Break $1,350 Resistance - Scotiabank 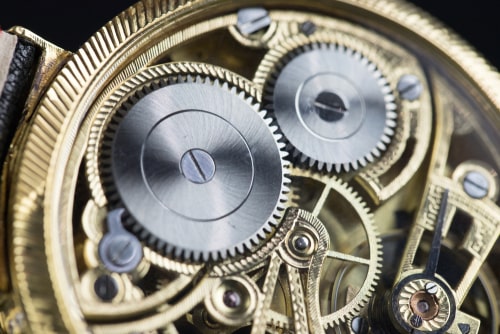 (Kitco News) - Gold will need several tries to successfully break the resistance level of $1,350 an ounce this year, said Scotiabank.

“We continue to believe that it won’t take just 1 attempt to break the cyclical range earmarked by $1350; either side of $1300 is the safe zone for now, as it awaits for a $- negative catalyst to evolve,” Scotiabank commodity strategist Nicky Shiels wrote in April’s Precious Metals update.

The reason it will take more than one attempt is a disconnect between gold and the drop in both real and nominal U.S. rates, Shiels said.

A large part of this is due to the resilience of the U.S. dollar, which is not reacting to a more dovish Federal Reserve and is continued to be viewed as protection against geopolitical risks, such as Brexit and U.S.-China trade talks, Scotiabanks’s update stated.

The other side of it is lack of “sustained volatility in U.S. equities,” which is a headwind for gold prices, the note added.

“Our original overarching 2019 investment theme—being long volatility, short politics and short the $ (which is best expressed by being long Gold) - is changing. One needs to search for relatively under owned late cycle inflation hedges that can piggy-back recovering stock markets. Gold should do well under that thinking,” Shiels said. 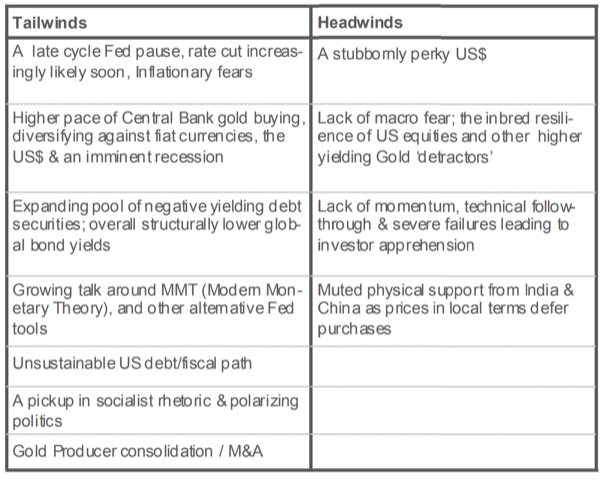 The good news for gold investors is that there are multiple supportive drivers in the works for gold, including increased interest from central banks, ETF activity, and the overall lower trajectory of the U.S. dollar.

“In the first 2 months of 2019, the largest most active 3 CBs (Kazakhstan, Russia & China) accumulated 27% (13 tonnes) more gold than they did during the same period in 2018. Global CBs currently hold <62% of their allocated reserves in the $, a 3rd quarterly decline and the lowest level since 2013 (according IMF data in March),” Shiels said, describing a de-dollarization theme many central banks are falling behind.

“Gold ETFs accumulated 800K oz in March 2019, bringing changes in total holdings for 2019 into positive territory. The resilience in ETF flows amidst rising global equity pricing is encouraging given the recent historical correlation between risk asset (outflows) and safe haven (inflows),” he added.