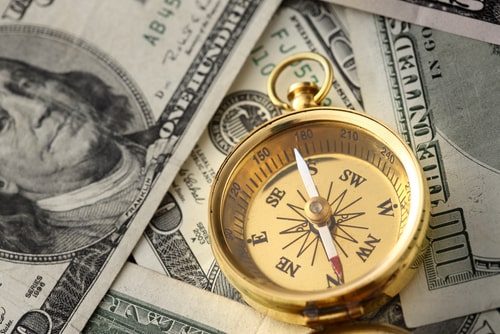 (Kitco News) - Gold prices are likely to see a move up next week as the yellow metal recovers following Thursday’s big drop, according to analysts.

The good news in all of this has been gold finding its footing, with prices expected to rebound slightly next week amid lower trading value due to a series of public holidays around the world for Easter.

“Gold is heading a little higher next week. We had a fairly robust decline from just over $1,310 to a low of $1,289,” TD Securities head of global strategy Bart Melek told Kitco News.

U.S. Dollar and China Are Key Next Week

There are several positive triggers that gold still needs to react to, including lower U.S. dollar, noted Melek.

“The most relevant is a decline in the U.S. dollar that we’ve seen overnight. We are down at 96.82, down from 97.2 or so,” he said. “Not much is going to happen today. But, after today’s strong rally in equities, risk appetite may very well come down.”

The U.S. dollar has been reacting to strong Chinese data, added Melek. “Once that enthusiasm in North American wanes a bit, the lower dollar should help gold out,” he said.

“Inch-by-inch China is starting to offer a more concrete story that underscores evidence of stabilization. Chinese data surprises are seemingly outpacing the U.S. now, amplifying the downside in the broad $,” McCormick stated.

On Friday, U.S. dollar was reacting to China’s strong March exports and money and loan data.

Data will also be very important during next week’s gold price action, analysts said, pointing to a number of releases that could trigger a bigger move in the metal.

"Gold seems to react to the premise that the Fed is data dependent and some of the data had justified rising rates again,” RJO Futures senior market strategist Phil Streible said.

On the docket next week are U.S. retail sales, housing data, Empire State Manufacturing, the Beige Book, and industrial production.

If you are a gold investor, the housing numbers — U.S. housing starts and building permits — are the crucial ones to keep an eye on, noted Streible.

“If the housing data is softer next week than expected, we might see the Fed more cautious on interest rates. They don’t want to completely derail the housing market,” he said.

The retail figure can also have a big impact on gold, added Melek, stating that anything stronger than market consensus would prevent gold from breaking out of its range.

But, if the market fails to get a big rebound in retail sales next week, gold will benefit and traders might see a rise to $1,306 and then $1,320, Melek explained.

Gold is unlikely to fall much further from current levels, Melek pointed out.

“We are at the lower bound. I don’t really see fundamental reason why we should be breaching to the lower side here,” he said. “We have very strong support around 100-day moving average, which is roughly around $1,288. On the upside, $1,306 is very much in the cards.”

With the upcoming Good Friday, Streible also warned that prices will easily be influenced due to lower volumes being traded. “We tend to see short covering coming into holiday weekend,” he said.

Gold is unlikely to rise above $1,325 in the short-term unless there is a bigger political or economic trigger, according to RBC Wealth Management managing director at George Gero.

“Traders are still buyers at this lower end of the range and sellers at the upper. Ranges are still $1,275-$1,325 for some time until we see more political and economic headlines,” Gero said.

MKS PAMP Group sees gold trading around $1,287 an ounce in the short-term while warning that a break below that level would bring $1,250 into play.

Putting aside short-term lackluster gold prices, the longer-term outlook is a much bolder one for the yellow metal, with Capital Economics expecting prices to rally to $1,400 an ounce by year-end.

Capital Economics is basing its outlook on projections of a slowdown in the U.S. economy and a sell-off in the equity markets later this year.

“Given the marked drop we expect in U.S. equities this year, we think that investment demand for gold in the U.S. and Europe will pick up considerably, particularly in the form of ETF buying. As a result, we expect the price of gold to rally from around $1,300 per ounce at present to $1,400 by end-2019,” Capital Economics assistant economist Oliver Allen wrote in a note on Friday.