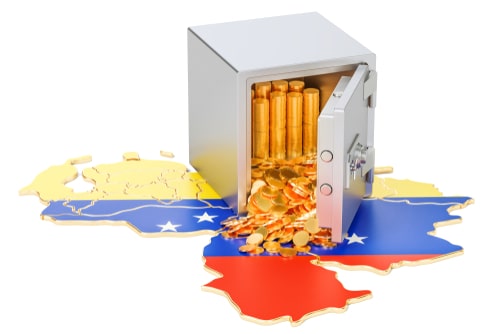 Venezuela sold off $400 million worth of gold, Bloomberg reported on Monday. This news followed Reuters’ report that Venezuela got rid of eight tonnes of gold from its central bank’s vaults at the beginning of April.

The sale was completed despite international sanctions keeping the South American country’s reserves frozen while Venezuela battles through political and economic crises.

Reuters also reported that Venezuelan central bank’s gold reserves dropped by 30 tonnes in 2019, which left the bank with about 100 tonnes of gold worth about $4 billion. The country’s central bank is yet to make a comment on the issue.

The gold market, in the meantime, has seen a very strong sell-off this week with June Comex gold futures dropping nearly 1% on Tuesday and last trading at $1,279.60.

The news that Venezuela is selling gold may have contributed to a drop in prices, RBC Wealth Management managing director George Gero told Kitco News on Tuesday.

“Of course it impacts the gold price. Anytime you have a large supply overhanging the market, it impacts trading. It did not help attract buyers,” Gero said.

However, a real long-term impact is unlikely to be felt by the market as investors usually pay more attention to countries like China when it comes to watching official sector gold purchases and sales, said TD Securities commodity strategist Daniel Ghali.

“I don’t think that the Venezuelan sales are necessarily a big damper on prices,” Ghali noted. “Broadly speaking the market does like to look at official sector purchases or sales. But from one particular country — Venezuela — I don’t think it would necessarily impact prices on the day. More likely the market will be looking at a broad set of countries, in particular China, which has been accumulating gold over the last few months.”

“Investors are watching China when it comes to gold reserves purchases. It is much more stable than Venezuela. You tend to make real irrational decisions when you are in dire straits. And I think that is what is Venezuela is doing right now,” Streible explained.

Earlier this year there were reports that Venezuela’s President Nicolas Maduro has been selling the country’s gold reserves to various firms in the United Arab Emirates and Turkey.

Venezuela is currently in its sixth year of a recession and a deep political crisis, with the U.S. and 50 other Western nations recognizing opposition leader Juan Guaido as Venezuela’s legitimate president.

The West has also introduced international sanctions against Maduro, cutting off his regime from the global financial system.

“We’ve been seeing a continuation of strong stocks, strong economic numbers, and lack of inflation in the short-run,” Gero said.

The risk-on sentiment is ruling the market at the moment, noted Streible.

“Equity markets punched through to new highs. It’s possible that we see the stock market make a new all-time high in the next couple of months. And that shows you that there is complete risk entrée and there is no reason to maintain gold in your portfolio right now,” he said.

In return the appeal of equities and other American risk-on investments is keeping the dollar well supported, Gero stated.

“If you want to earn more money, international investors have to come to the U.S. whether they buy 10-year U.S., stocks, or securities,” he said. “All of this keeps the dollar firm and the dollar maintains its strength even without the Fed raising rates because other countries have lower rates.”

Ghali pointed out that investors have been re-anchoring their growth views, which also means “subsiding” expectations of a Fed rate cut in the near term. Another catalyst has been the CTA positioning, which on the day has liquidated some of their lengths, added Ghali.

Gero is still looking for gold to hold the $1,275-1,325 range this year. “There will be more political headlines coming, more surprises coming. Long-term, there will be inflation caused by all of this,” he said.