Miners increased the amount of material moved while holding costs constant over the past handful of years, says McKinsey in a study of mine productivity.

McKinsey updated Kitco News on its MineLens service, a mine productivity gauge that benchmarks mining operations against other mines and even the industry as a whole. MineLens is mostly a measure of how much material is being moved for the amount of resources being deployed, such as capital expenditures, operating expenditures and labor.

"The overall trend is still positive. There is a general upswing in productivity," said Nathan Flesher, Associate Partner at McKinsey’s MineLens service, commenting on findings up to the year 2017. 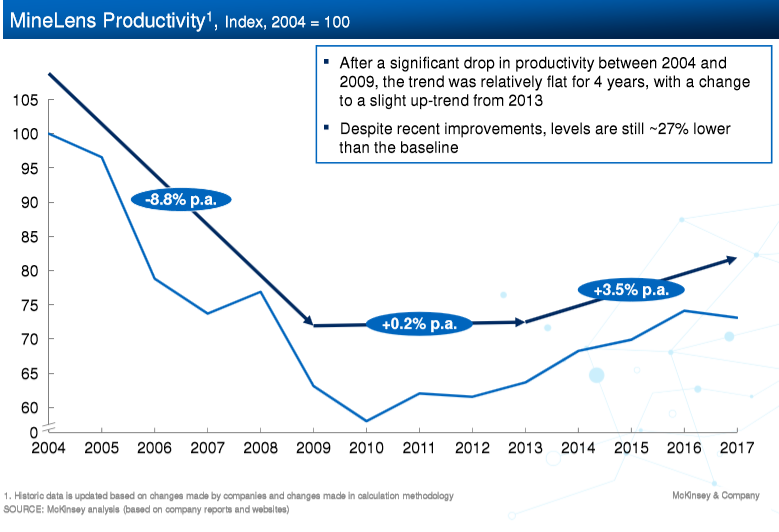 From the baseline year of 2004, McKinsey said there was a significant drop in productivity until 2009. The frothy merger-and-acquisition environment of the past, which inflated asset prices, hurt productivity measures.

Since the start of this decade, there has been a gradual improvement. Still the overall industry benchmark is about 25% below its 2004 peak.

Flesher said McKinsey is studying the causes of the recent upswing, but speculated that companies are just doing a better job of wringing more productivity out of their current operations.

"People are putting more emphasis on sweating their assets,” he said. “It is unusual to have some type of mine system that doesn't have some latent capacity if you actually go after it."

"Lots of my clients are intently focused on digital, and how do we do this right."