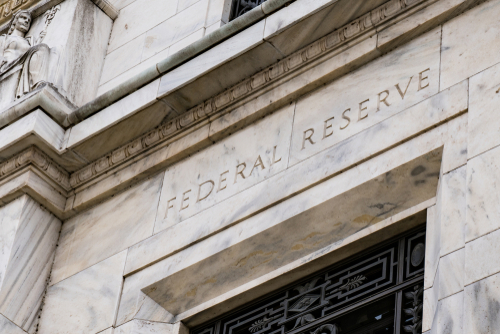 During the press conference, Powell had an air of optimism when speaking about the U.S. economy, stating that low inflation is only temporary and economic growth is supported by job creation, consumer spending, and business investment.

The Fed announced on Wednesday that it is keeping interest rates unchanged within a range between 2.25% and 2.50%. At the same time, the central bank adjusted one of the tools that keeps the Fed funds rate within its target range — the “interest on excess reserves” (IOER) — to 2.35% from 2.4%.

Powell explained away the move as a “small technical adjustment” that does not signify any change in the central bank’s policy stance.

Powell also stated that “solid underlying fundamentals” are supporting U.S. economy, including job growth, rising wages, strong consumer sentiment, and business investment. “Incoming data has been broadly in line with expectations,” he said. “Inflation has been weaker than anticipated.”

Powell also pointed out that “core inflation unexpectedly fell.” He later clarified that the Fed suspects that “transitory factors are at play,” with the central bank projecting for inflation to return to 2% over time.

#POWELL LIVE: Transitory factors holding down #inflation are portfolio management services, apparel prices, airfares. There is a reason to think that these would turn around | #FED | pic.twitter.com/jQtU58zRbH

When asked to identify some of the transitory factors keeping inflation down, Powell pointed to portfolio management services, apparel prices, and airfares while stating that “there is a reason to think that these would turn around.”

The only scenario where the Fed would be concerned with inflation is when it remains below the Bank’s target range for a long time, Powell admitted.

However, not all market participants and economists are convinced that low inflation is something temporary.

“The latest [inflation] decline appears to be more broad-based … In particular, services inflation is now being depressed by the slowdown in unit labor cost growth. If we’re right and the weakness in core inflation continues, Fed officials will eventually be forced to admit it is more ‘persistent’ and to loosen policy accordingly,” said Capital Economics chief U.S. economist Paul Ashworth.

The Fed chair also highlighted that data out of China and Europe have been better and short-term Brexit risks have somewhat dissipated for the time being.

“The committee is comfortable with current policy stance. Don’t see a strong case for a rate move either way,” he said.

Powell also described the financial state of the economy as resilient. “While there is some concern around non-financial corporate debt, overall financial vulnerabilities are moderate and financial system is resilient. Households are in good shape,” Powell stated.

Overall, Powell said that he sees the U.S. “on a good path for this year.”