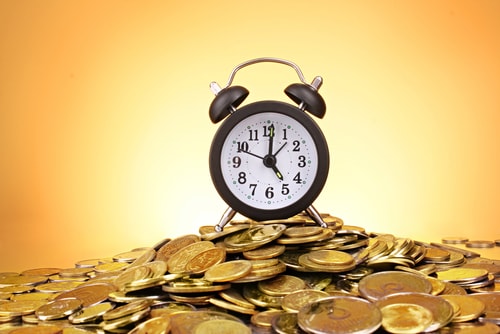 (Kitco News) - Gold bulls will not be locked up for much longer as gold’s hibernation is likely to come to an end soon, said Bloomberg Intelligence (BI), noting the metal’s divergent strength in Q1.

“The primary diversifier, gold, at the bottom of the performers, is more likely to move higher, notably if the dollar doesn't. Unchanged gold is showing divergent strength vs. the primary recovery driver in 4Q -- increasing stock market volatility -- which has plunged in 2019,” BI’s senior commodity strategist Mike McGlone said in the May’s edition of Commodity Outlook.

Gold bulls have been restrained this year due to lower U.S. stock market volatility and higher U.S. dollar, McGlone pointed out, adding that those factors are unlikely to last.

“The metal being essentially unchanged in 2019 to April 29, despite the plunging CBOE S&P 500 Volatility Index (VIX) and recovering dollar, is a sign of divergent strength in gold,” he wrote.

Gold is currently near its bottom, with the metal’s support levels holding, BI’s note said. If this continues, gold should move higher.

“Gold should hold support near its mean since the first Fed rate hike, we believe. Almost $1,260 an ounce is the average price since December 2015 vs. $1,284 on April 30. If gold continues to do what it's been doing for most of the past three years, it will revisit the lower end of a narrowing cage. We view this as unlikely. Sustaining above this mean would be an initial sign of strength to poke through the upper end of the range,” McGlone stated. 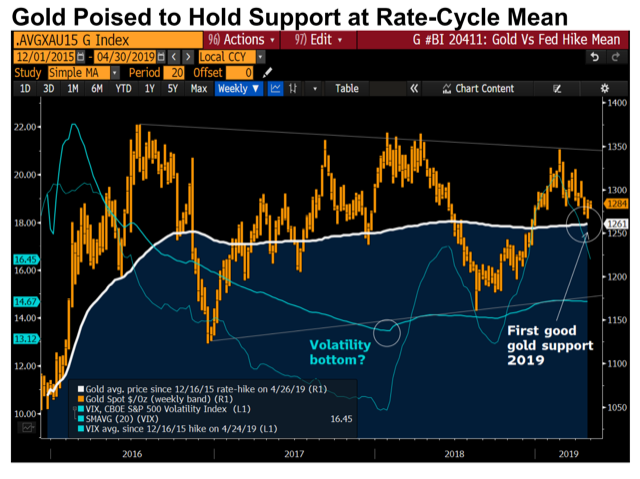 One of the key drivers for gold in Q2 will be increased stock market volatility, which has hit a bottom and is most likely to go up from here, according to BI.

“If the CBOE S&P 500 Volatility Index (VIX) has bottomed, it's a tailwind for gold … Conditions for the depressed VIX don't get much worse, which boosts our outlook for gold. Almost 29% below its 200-day average, the VIX is at the steepest discount to this mean in three years. U.S. stock-market volatility downside is limited,” McGlone said. “With the VIX near multi-year lows below its 200-day average and gold still about 2% above, simple time-tested rules of mean reversion favor higher gold.” 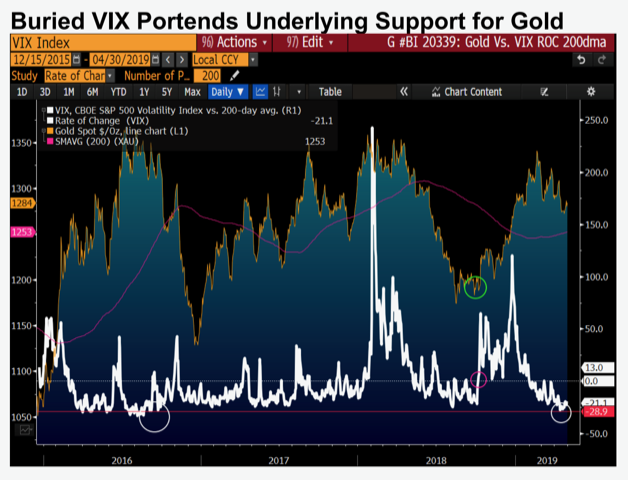 The pressure from the higher U.S. dollar is also likely to subside, stated BI, noting that the dollar is “looking vulnerable near a two-decade high.”

Gold kicked off the month of May by hitting 4.5-month lows following the Fed’s chair optimistic tone as the central bank left its interest rate unchanged on Wednesday. June Comex gold futures were last trading at 1,272.20, up 0.02% on the day.