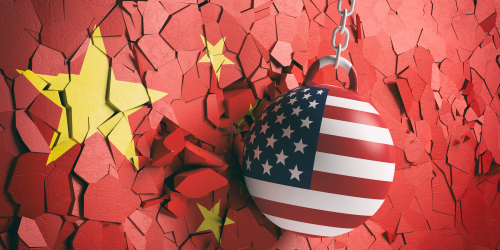 (Kitco News) - Gold will be an attractive safe-haven asset as rising trade tensions weaken the U.S. economy and drag down the U.S. dollar, according to a recent report from Morgan Stanley.

But it's not the current trade dispute with China that investors should be paying attention to; the banks said that a potential trade war with the European Union is the most significant risk to the economy.

U.S. President Donald Trump has until May 18 to decide whether he will impose a 25% tariff on car imports from the European Union. The deadline comes 90 days after the U.S. Commerce Department said in a study that auto imports pose a threat to American national security.

However, there are some reports that Trump could postpone the decision for another six months -- avoiding a two-front trade war -- while the U.S. continues to negotiate with China.

"The eurozone's countermeasures may turn out to be more impactful compared to China's, which may help explain why last week's U.S. equity sell-off has especially affected companies with significant non-U.S. revenue streams," the analysts at Morgan Stanley said in their report released earlier in the week.

The analysts added that a trade war with Europe could force the Federal Reserve to cut rates. According to the CME FedWatch Tool, markets are pricing in a more than 70% chance that the U.S. central bank will cut interest rates by the end of the year. Market expectations have risen significantly in compared to the previous week.

"This is why the USD does not benefit from trade tensions to the extent experienced in August/September last year," the analysts said.

The analysts said that a further inversion of the yield curve and growing investor pessimism will undermine the U.S. dollar, which in turn will push gold prices higher.

"We believe it is only a question of time before we see liquidity pushing gold prices higher and the USD lower," the analysts said.

Gold could also benefit if the U.S. government does postpone the European auto tariffs as Morgan Stanley sees this helping the euro against the greenback.

Even if the U.S. avoids a trade war with Europe, its ongoing dispute with China still poses a significant risk to the global economy.

In a separate report published this week, economists at Morgan Stanley said that a global recession would be "imminent" if the

"Trade tensions and the resultant hit to growth could accelerate corporate defaults, particularly in the U.S.," the economists said.
By Neils Christensen