(Kitco News) - Iamgold Corp. (TSX: IMG; NYSE: IAG) issued a statement Friday saying it will not comment on market speculation, one day after its shares rose sharply when a major news organization said the company is considering the sale of all or parts of its gold business.

Shares on the New York Stock Exchange rose from a close of $2.39 on Wednesday to a high of $2.75 Thursday, before finishing at $2.60. Bloomberg reported Thursday that Iamgold, which has four operating mines, has been in talks with potential buyers.

“As a general policy, the company does not comment on speculation and rumors,” Iamgold said early Friday. “The company is not aware of any material change that would account for recent trading activity in its stock. 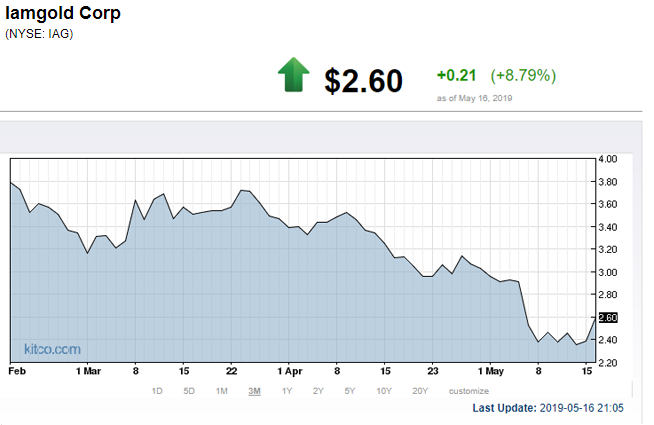 “The company regularly reviews strategic alternatives available to it and may engage in discussions regarding potential transactions. The company will inform the market as required and does not have any further comment at this time.”

The Bloomberg report came the week after Iamgold reported an adjusted net loss for the first quarter as sales from several mines fell from a year ago, although much of the decline in volume was due to increased seismicity at Westwood and lower grades at other mines. Iamgold’s share prices had fallen by around 35% so far this year prior to Thursday’s bounce, including a 38-cent decline on the day after its last earnings report.