(Kitco News) - As the trade dispute between the U.S. and China heats up, it has an impact on crypto miners who are making ‘considerable adjustments’ to strategies and operations. 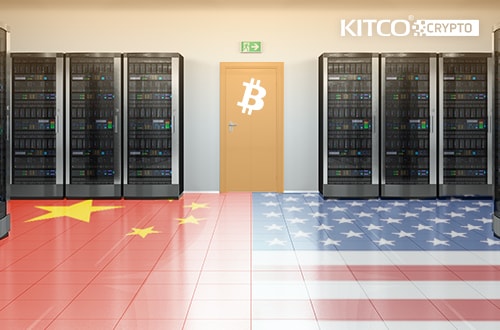 The current bull market is reported to be bringing profitability back to the mining market. It is worth noting, China is the epicenter of global cryptocurrency mining and where the most computing power is used to mint new Bitcoin than any other country.

David Williams, chief technologist at BlockRules says: “The 2019 bull market is bringing profitability back to mining. China, with mining companies like Bitmain, has a big lead in the mining industry worldwide with their use of application-specific integrated circuits (ASICs)”

Williams explains, China certainly has a lead over the U.S that is unlikely to be affected by the U.S. and China trade dispute. “The only way to break Chinese dominance in the mining industry requires moving cryptocurrencies from old mainstays, such as Bitcoin, to more modern implementations, like Ethereum, which will shift the mining paradigm away from ASICs.” says Williams.

Matt D’Souza, co-founder of Blockware Solutions and a consultant at KPMG based in Chicago, explains tariffs coupled with the Bitcoin bear market have been a significant factor causing U.S. based miners and the Chinese manufacturers to make considerable adjustments to their strategies and operations.

“It [tariffs] has created a robust peer to peer market for used s9’s in the U.S. as the tariff is avoided - saving miners 25% on their investment. The tariff has pushed many investors to procure used s9's rather than invest in the newest equipment out of China due to a quicker earn back,” says D’Souza.

It is reported the ‘Antminer s9’ the most powerful miner available on the market.

D’Souza explains even without the tariff the used s9 has a lower earn back but it would also have a shorter useful life cycle as they are used equipment, but D’Souza believes the further delayed earn back created by the tariff is material enough to influence a miners decision to stick with old, used hardware.

“So U.S. Miners have altered their strategy by avoiding the tariff by focusing on procuring used, older equipment from facilities and retail that over invested at the top and are presently puking the lows. Manufacturers are making investments to avoid the tariff so they do not lose the U.S. market which is experiencing the most growth in Bitcoin mining,” says D’Souza.

According to Blockware Solutions Malaysia seems to be an alternative facility to import equipment to the U.S. Bitmain has invested and built out a facility in Malaysia. As a result, large orders from the U.S. come from the Malaysia facility so the tariff is avoided but this is a new initiative so it is very supply constrained. Bitmain has been the leader in providing this offering.

“We have purchased 100's of next-generation machines through the Malaysia facility to avoid the tariff, which balances the math making an investment in next-generation equipment optimal. Yes, mining has picked up dramatically as if we are in a bull market,” adds D’Souza.

For now, Blockware Solutions remains optimistic that crypto miners will prosper as the market recovers.