Gold Is Second Most Popular Investment Choice For The Swiss 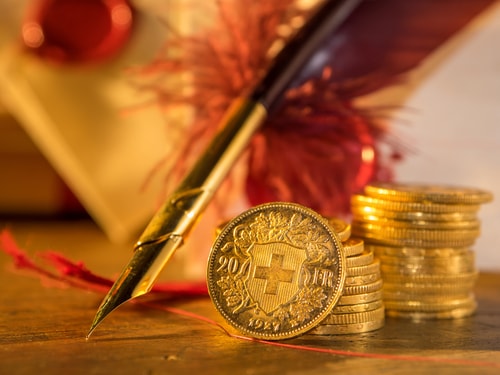 (Kitco News) - A new nationwide survey revealed that the Swiss really like buying gold and rank the yellow metal second on a list of preferred investment vehicles, just after real estate.

“Gold is among Swiss people’s favorite forms of investment. The most popular one is real estate (mentioned by 53% of the interviewees), but gold comes a close second with 48%, followed by shares (30%), funds (25%) and current and savings accounts (24%). Platinum occupies ninth place, silver is in 13th place,” said the research team behind the survey, which was conducted by the University of St Gallen in cooperation with the precious metals trader philoro.

The survey interviewed 2,300 adults from German-, French- and Italian-speaking parts of Switzerland between March 28 and April 7.

The Swiss said they chose gold to protect themselves from geopolitical and interest rate risk.

“Low interest rates, the fading attraction of classic forms of saving such as the savings account, as well as economic and political uncertainties are the hallmarks of today’s financial market. Against this background, investors increasingly rely on physical precious metals since this form of investment is regarded as inflation-proof and as an iron ration in times of crisis,” University of St Gallen’s said in a press release.

Switzerland’s central bank holds about 1,040 tonnes of gold, which makes it the eighth largest central bank gold holder in the world. On the per-capita basis, the central bank’s gold holdings amount to about 127 grams per person.

However, Switzerland has eased up on the percentage of gold that it holds. The percentage share of gold held in foreign reserves at the bank has dropped to 5% from 39% a decade ago.

The survey also found that one in five Swiss nationals wants to buy gold in the next 12 months.

“Almost two-thirds of the Swiss population consider precious metals to be a sensible form of investment (60.5%). Almost one in five Swiss nationals is even planning to invest in precious metals in the coming twelve months (19.2%),” the study said.

Another point worth highlighting is that demand for gold rises in correlation with household incomes.

The current trend is to buy gold directly from the bank the Swiss are with, the survey concluded, revealing that nearly 62% of respondents bought the yellow metal from their principal banks.