(Bloomberg) -- The dollar is poised to slide into a "modest bear market" as Treasury yields collapse on the back of the Federal Reserve's dovish pivot.

Treasury 10-year yields fell to 1.97% Thursday, the lowest since 2016, while markets are pricing in more than 25 basis points of easing at the Fed's July meeting. The Dollar Index has tumbled 1.3% in June, heading for the biggest monthly loss since January 2018, and was trading below the 200-day moving average on Friday.

"It is hard to imagine global central banks out-easing the Fed in the coming months since everyone has run out of ammo with negative rates, compared to the Fed that has a nice cushion," Upadhyaya said Thursday by email. "This marks the green light for the start of the USD bear market." 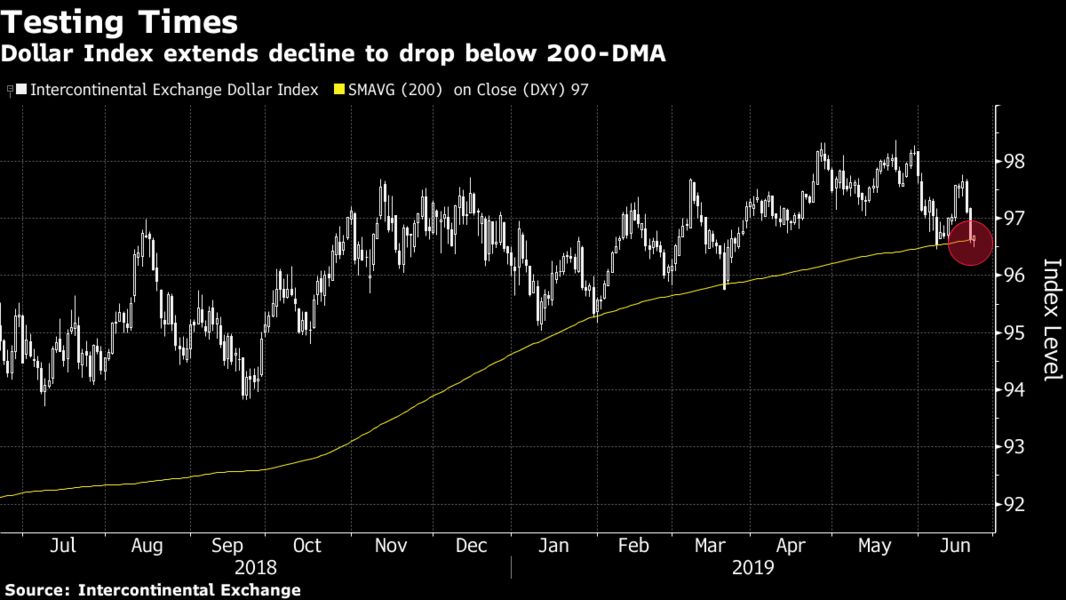 The bearish outlook marks a slight shift for Upadhyaya, who before the latest Fed meeting said a depreciation in the dollar could take months to materialize. He's still keeping the door open for a slow move.

"If the data remains sound and if there are signs of an impending deal" between the U.S. and China, the Fed could "hold its fire," Upadhyaya said. "While it looks like a rate cut in July is a done deal, the door is not entirely closed for a pass at the July meeting."

Despite the potential for Fed cuts, there are still plenty of factors on the greenback's side. Treasury yields remain relatively high compared with other developed markets, with the world's stockpile of negative-yielding bonds topping $13 trillion.

Uncertainty about global economic growth may fuel haven demand for the dollar as investors question whether rate cuts will provide the desired boost. With a number of Fed policy makers scheduled to speak in the next week, there's a risk they could dial back the dovish rhetoric.

Still, Fed watchers generally view a rate cut in July as most likely. Almost half of policy makers in the Federal Open Market Committee indicated Wednesday they are leaning toward a cut by year-end. Wall Street's sell side is also jumping on board.

Moment of truth for DXY. Closed today right on top of 9 month uptrend and just above 200-day MA. And gold broke out above it's huge base.

--With assistance from Alyce Andres and Robert Fullem.

To contact the reporter on this story: Susanne Barton in New York at swalker33@bloomberg.net

To contact the editors responsible for this story: Benjamin Purvis at bpurvis@bloomberg.net, Greg Chang, Nick Baker