Putin's Big Bet on Gold Is Paying Off

(Bloomberg Opinion) -- For years, Russia has been the world's biggest sovereign gold bug: Even while gold prices were in the doldrums, it doggedly kept increasing its reserves. Now that gold is at the highest level since 2013, the tactic appears to be paying off.

The U.S. dollar's dominance as a global reserve currency is commonly thought to result from the dearth of safe assets. Russia, however, recently has provided an example of how a sizable economy with the world's fifth biggest international reserves can minimize dollar assets and still do well. So far, it doesn't have many followers, but gold buying by central banks is going up.

Since being hit by sanctions for its aggression against Ukraine in 2014, Russia has had good reasons to rethink the composition of its international reserve. While the European Union hasn't toughened its sanctions for almost five years, the U.S. has been doing it all the time. The Kremlin and the Bank of Russia consider the risk of further restrictions unpredictable and dependent more on U.S. domestic politics than on anything Russia does. In the 12 months since the end of September 2017, the central bank has more than halved the dollar's share in its international assets and sharply increased the shares of the euro and the renminbi. 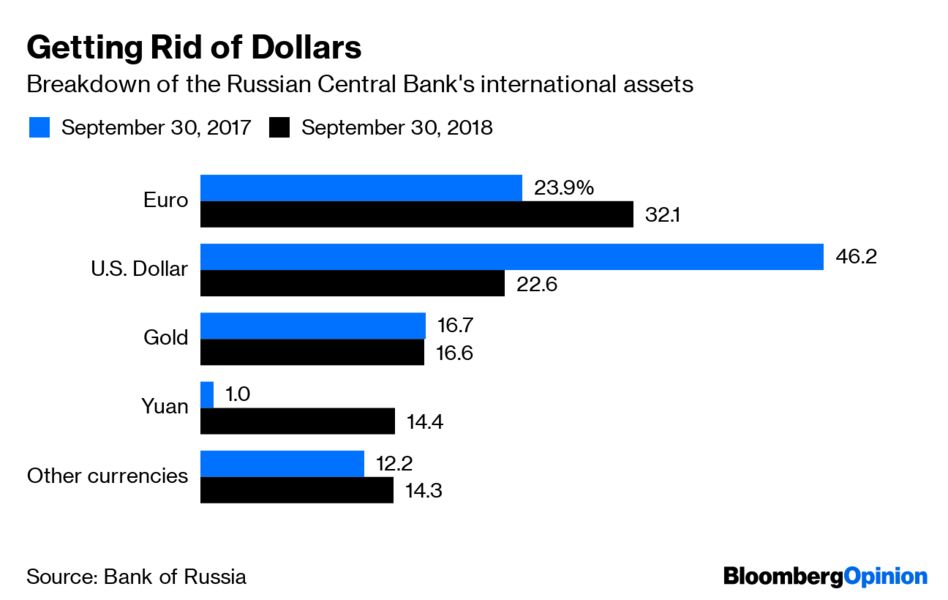 These data, the latest available from the central bank, show the share of gold slightly dropping, even though Russia added 274 metric tons of the metal to its reserves in 2018, bringing its total reserves to 2,113 tons. That's because other assets also increased as Russia sought to insulate itself from Western pressure – and because in those 12 months, the price of gold dropped by almost 7%.

Generally, though, the metal's market performance has, for the most part, justified Russia's stubborn trust in it. 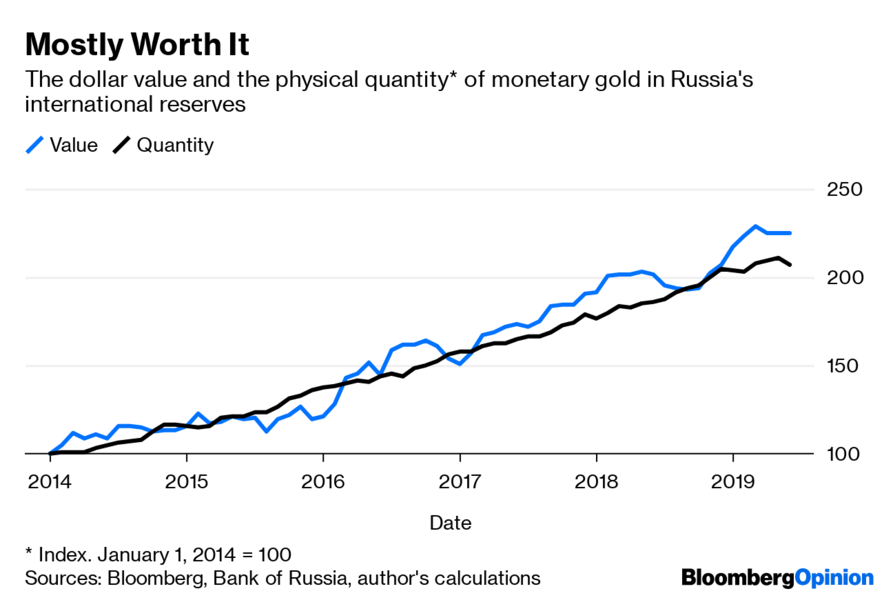 And so far this month, as the price of gold has soared by about 7%, it has added about $7 billion to Russia's international reserves (assuming no new purchases since the end of the first quarter of 2019). If the price increase holds, gold will account for some 20 % of Russia's half a trillion dollars in international reserves, approaching the dollar's share.

The dollar, of course, remains the world's biggest reserve currency, and gold and other currencies aren't exactly displacing it worldwide. But then, the World Gold Council has noted an upward trend in net gold purchases by central banks that goes way beyond the Russian effort – even through Russia remains the biggest buyer. In the first quarter of 2019, central banks bought a record amount of gold, 715.7 metric tons. 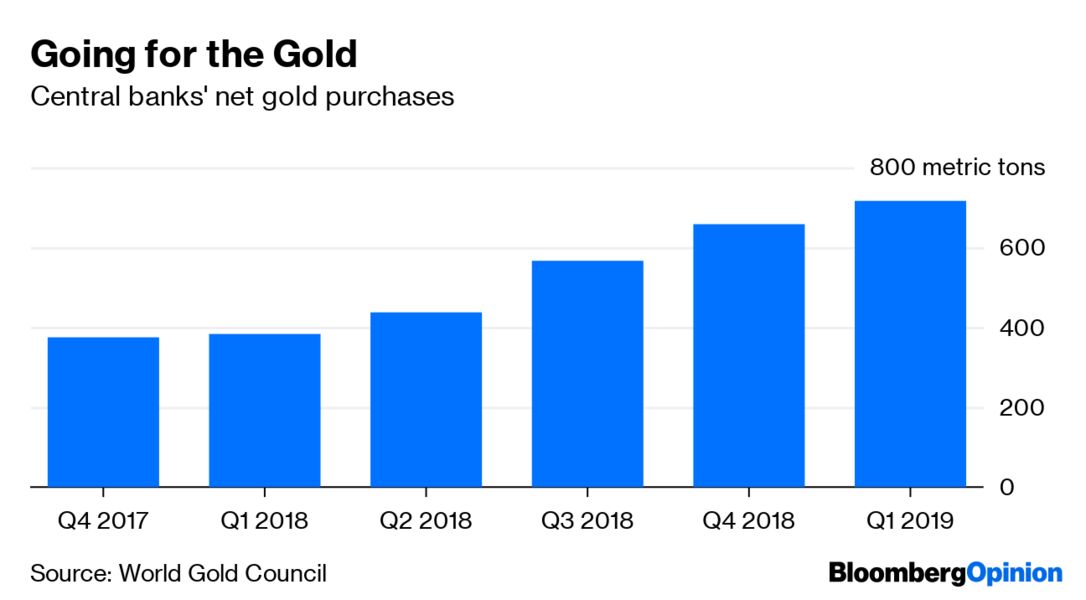 China has its own problems with the U.S. and with the dollar. While it can't cut its enormous dollar assets as decisively as Russia has reduced its smaller ones, it has gone for a gradual reduction. And it has shown an increased interest in gold. 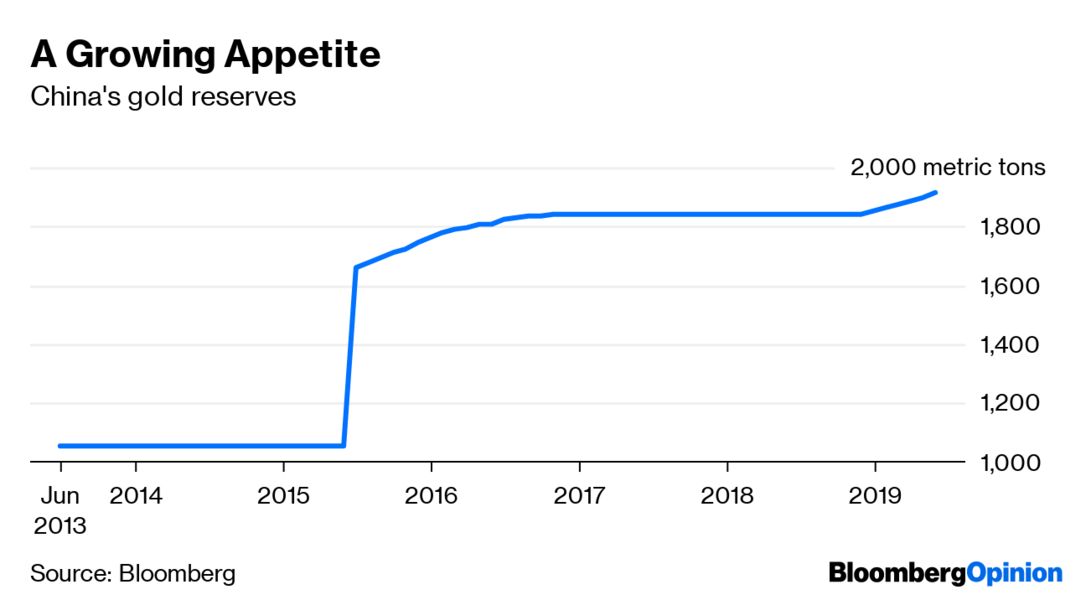 Other significant gold buyers include Turkey and India -- the latter, like China and Russia, a member of the global top 10 by international reserves.

Low U.S. interest rates, the Trump administration's unpredictable combativeness and insatiable appetite for debt, and geopolitical instability are making gold look like a safer asset than U.S. debt instruments. A few more years of this, and it's possible that more countries' international reserves will be structured like Russia's.

President Vladimir Putin's regime moved first among big reserve holders to phase out the dollar because it had the biggest reasons to fear the U.S. The current and future U.S. administrations should tread carefully to avoid giving others similar incentives to kick their dollar habit and follow the Kremlin's example. While Russia's economic management in general leaves much to be desired, the country's approach to building international reserves is looking more and more prescient.

To contact the author of this story: Leonid Bershidsky at lbershidsky@bloomberg.net

To contact the editor responsible for this story: Tobin Harshaw at tharshaw@bloomberg.net

This column does not necessarily reflect the opinion of the editorial board or Bloomberg LP and its owners.

Leonid Bershidsky is Bloomberg Opinion's Europe columnist. He was the founding editor of the Russian business daily Vedomosti and founded the opinion website Slon.ru.

For more articles like this, please visit us at bloomberg.com/opinion