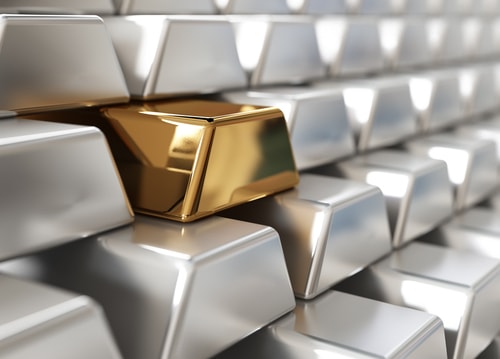 “The gold:silver ratio no longer has much relevance. With gold prices running hard, we have received many questions as to what this means for silver. In our view, while gold continues to receive ‘annuity’ demand from macro asset allocation trends, silver does not, and until this changes we may be looking at a growing disparity over time,” said Colin Hamilton, BMO Capital Markets managing director of commodities research.

Other assets stealing attention away from silver are cryptocurrencies, added Hamilton, pointing to the traditional retail investors as being “somewhat distracted” by the new digital assets out there.

Gold, in the meantime, has likely seen the peak of its rally as most of the changes in risk sentiment have been priced in already, added Hamilton.

“With June’s FOMC meeting acting as a catalyst for the recent run in gold prices, and with prices now at a fresh six-year high, we believe much of the current macro sentiment and uncertainty is priced in,” he wrote on Tuesday.

The overall environment is expected to remain supportive of gold, with new money moving into the space, BMO’s note stated.

“Given the aggression in the move, we do think macro asset allocators have moved very quickly to price in loosening monetary policy, as evidenced by rapid ETF inflows and addition of length in futures contracts,” Hamilton said. “Key catalysts behind the recent move, notably a protracted US-China trade war, a switching dovish stance among developed market central banks, and rising geopolitical tensions between the US and Iran, have prompted a rapid flight to safety.”