Bitcoin Breaches $13K: It's Not A Currency, It's A Security - Goldmoney Founder

(Kitco News) - Bitcoin doesn’t trade like a currency, but rather like a security, said one financial expert as the popular digital currency continued to rally, surging above the $13,000 level.

“At $200B+ nominal market cap, BTC would rank as one of the largest currencies in the world, yet its more volatile than some of the worst fiats in history,” Roy Sebag, founder of Goldmoney tweeted on Wednesday. “The more I reflect, the more I come to the realization it’s a security.” 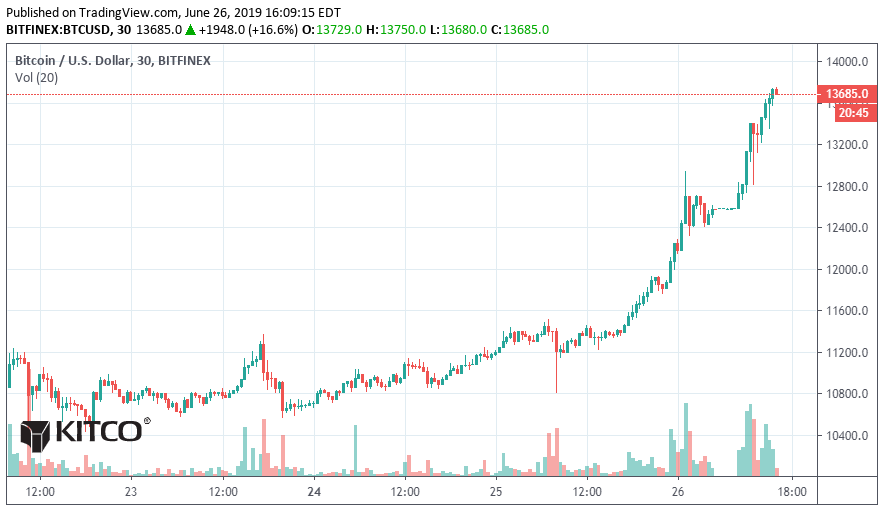 “I am merely playing Freud in this Oedipal revolt against the Father (Gold) initiated by the bitcoin evangelists,” he said, referencing the popular “bitcoin vs. gold” debate that has recently intensified with the #DropGold campaign started by Grayscale Investments.

Sebag noted that because of bitcoin’s young age, there hasn’t been enough time for regulators to understand its mechanics, and so governance has fallen into the hands of the cryptocurrency’s miners. The high concentration of miners equates them to executives “stewarding the enterprise,” and positions buyers as “shareholders in a common enterprise for joint profit,” he wrote.

“Buyers of coins pay upfront to miners who in turn use the money to pay for the maintenance of the network, yet there is nowhere any clear disclosure or risk factors about this,” Sebag tweeted. “Coins trade at exchanges. The common enterprise is designed for the price appreciation of coin.”

Referencing the Securities Exchange Act of 1934, which regulates the sales of securities in the secondary market, Sebag said bitcoin can be classified as a security.

“Ultimately this realization rests on the belief that neither bitcoin nor any common enterprise is truly decentralized,” he continued. “An industry working together towards the same aim under the same rules of engagement can be legally viewed as an enterprise or organization.”

Sebag later added that he also came to this conclusion by revisiting “old files/notes/emails with various crypto thought leaders dating back 5-6 years,” and noticing that the current state of the market was inconceivable in the past.

“In other words, if you speak to the people involved from the beginning, they will (only privately it seems) admit that this is a serious design failure,” he wrote. “$200B market cap at 65,000 Ph/s means $10B a year just to maintain network conservatively. A currency with a 5% negative yield.”

“The very best case for BTC is a potato sack race with Gold against Fiat Money,” he concluded.

Bitcoin has been rallying this past month amid increased demand for the crypto space. At the time of writing, prices were up more than 16% on the day at $13,661, marking a new 17-month high.

News that that Facebook is launching its own cryptocurrency called Libra, which will have a wider effect on governments and central banks across the globe, has been boosting bitcoin prices.

1/x Is Bitcoin a security? <10 years old so regulators haven't even had enough time to truly learn how it works (think Napster or Kazaa in early days). Miners are clearly issuing coins and responsible for governance, an absence of formal relations among them is irrelevant.... https://t.co/l4JWU7jcjF