June 26 (Reuters) - Gold prices fell more than 1% on Wednesday, retreating from a 6-year peak scaled in the previous session, on signs the U.S. Federal Reserve will not resort to aggressive interest rate cuts in July. 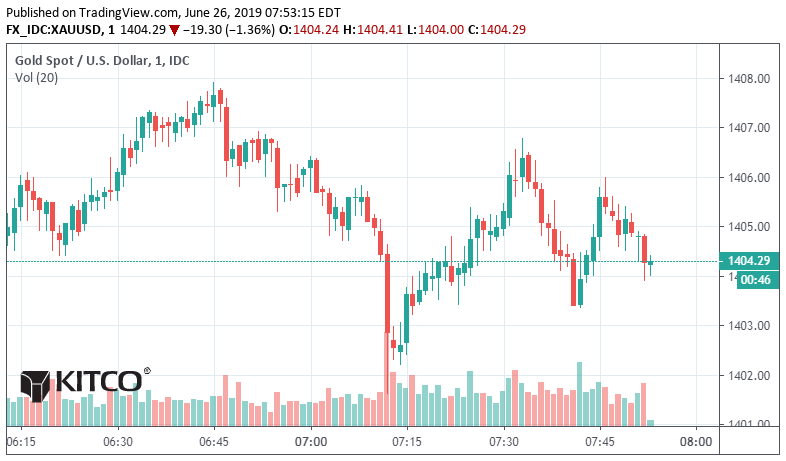 Fed Chairman Jerome Powell stressed the central bank’s independence from U.S. President Donald Trump, who is pushing for rate cuts. St. Louis Fed President James Bullard, considered one of the most dovish U.S. central bankers, surprised some investors by saying a 50-basis-point cut in rates “would be overdone”.

“We have had quite a move higher in gold. There is an element of profit taking and the catalyst for that (were) the comments from the Fed yesterday,” ING analyst Warren Patterson said.

“Perhaps, the markets got ahead of itself over the outlook for rate cuts this year, which had driven gold higher. The realisation that we are not going to see as many cuts as we were anticipating is weighing on gold at the moment.”

Even as the Fed played down big rate cuts, investors are still expecting at least a quarter percentage point reduction.

Despite falling almost $30 from the six-year high, gold is still up 8% so far this month.

“There will be short term volatility, but our positive conviction on gold has not changed,” said Heng Koon How, head of markets strategy at Singapore’s United Overseas Bank, adding the bank saw gold hitting $1,500 by mid-2020.

“Gold has had a strong ‘melt up’ over the last month. So some short term profit taking is to be expected.”

The next move in gold could be decided by the outcome of trade talks between the United States and China during the G20 summit in Japan on Saturday, analysts said.

Holdings of SPDR Gold Trust, the world’s largest gold-backed exchange-traded fund, fell 0.3% to 799.61 tonnes on Tuesday from 801.96 tonnes on Monday.

Meanwhile, gold demand in India could fall to its lowest level in three years as a rally in local prices to a record high dents retail purchases.

Platinum was up 0.1% to $806.57 per ounce. (Reporting by Nallur Sethuraman in Bengaluru, Editing by William Maclean and Emelia Sithole-Matarise)