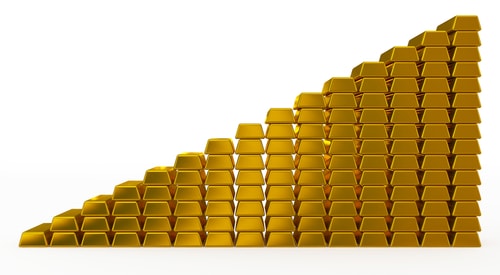 (Kitco News) - Gold price consolidation late this week creates a set-up for more gains with prices expected to near $1,500 in 2020, according to TD Securities.

Despite dropping from fresh six-year highs on Wednesday, the yellow metal still managed to steady itself well above the $1,400 an ounce level on Thursday. At the time of writing, August Comex gold futures were trading at $1,412.40, 0.03% on the day.

The next big items on the agenda for gold are the G20 meeting and the July Federal Reserve interest rate announcement. The former is unlikely to have much of an impact on the yellow metal, with the market zeroing in on the Fed, strategists at TD Securities said on Thursday.

“Gold consolidates ahead of the July FOMC meeting, creating a set-up for further gains,” the bank said in its Global Markets note.

The Fed is projected to react “more aggressively” amid TD’s downgraded data expectations, the bank added.

“Crosscurrents and softer inflation led to a dovish Fed shift. We look for 75bp of cuts in 2019 and 75bp in 2020,” TD Securities wrote. “While consensus growth expectations suggest US GDP growth around 1.8% Q/Q SAAR in the coming four quarters, our tracking suggests that is likely to be about 0.5pp lower.”

The Fed’s dovish turn will continue to be a big driver for gold and a big headwind for the U.S. dollar throughout this and next year.

“Though the USD still retains a yield advantage over much of its peers in the G10, we think the USD, on balance, remains destined for a course correction lower,” the bank’s strategists noted. “We see a 2-3% move lower in the DXY by year-end as tit-for-tat easing likely continues to limit sharper FX moves this year.”

This global central bank outlook creates “a perfect world for gold,” the bank said while adding that it has extended its “target on long gold position to $1485.”

#Gold price taking a breather or something bigger lurking? "In my 45 years in the business, I have never been more uncertain" - @Kitco_Metals' #PeterHug tells @DanielaCambone | @KitcoNewsNOW #kitconews #finance #markets #economics #mining #investing | https://t.co/M8CHrxHQpJ

The G20 meeting this week is unlikely to resolve anything with the U.S.-China trade conflict, the strategists pointed out. The most probable outcome is an announcement that talks will continue.

“We have downgraded odds of a resolution of the US-China trade war this year and see more signs the May tariffs are feeding into worse data, driving global easing this year and next,” the strategists wrote. “We expect an announcement at the G-20 of US-China talks to continue, which can add some positivity to markets, but overall, we don't expect that to have real legs.”